(Another rerun post that people using search engines seem to like, this one from October 2008. Although I hint at the end that I might follow up, I never really did. There's definitely a lot more to be said, and I'm more conscious than I was even two years ago that there are many valid perspectives on the subject. This isn't meant to be the right approach or only approach, just mine.)
.
It's easy to talk about "line" in drawing without ever really defining it. It's a vague and slippery arty-farty term that can make you sound smart without really pinning you down. "His work has such an expressive line!" Well ... who can argue with that? But what, if anything, does it mean? This post takes a stab at describing what I mean when I look at, judge, and draw a line.

I remember clearly the moment I first got the concept of line. It was a college life-drawing class, when the instructor showed us a cartoon by Michelangelo with everything in the image obscured except one line that ran from a figure's hip to its ankle. (Originally, a "cartoon" was a sketch an artist did in preparation for a painting and is the sort of cartoon I mean, although it is cheeky fun to refer to giants like Mike as "cartoonists." Technically true.) This ochre scribble had form and mass. It carried weight and seemed to twist in and out of the page. When you really looked at it, it was astonishingly graceful and expressive. And it was just a single line! Somewhere in my hippocampus, a penny dropped.

Cartoonists traditionally (that is, pre-digitally) draw their lines in pencil first, then go over them with ink pens or brushes to make them black. Many (probably most) artists like their pencils better than their inks, finding the preliminary work more spontaneous and lively. That's not true for me. I never feel like one of my drawings comes to life until I've inked it, and I think the quality of line and the tools I draw it with make the difference. Those tools are a fine sable or sable-synthetic brush and a variety of nibs, usually crow-quill. 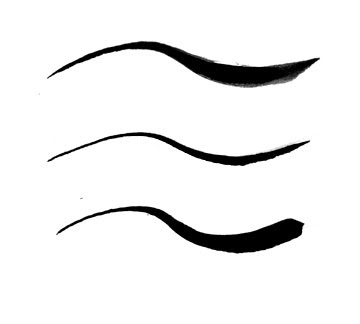 The lines above were made by (top to bottom) a brush, a stiff crow-quill nib, and a more flexible crow-quill nib. I make them thick or thin just by pressing harder or lighter as I draw. I can use these different line weights in a few ways: first, to indicate light and shadow; second, to suggest mass; third and more subtly, to represent something I'm not sure what to call but the best word I can think of is "tension."

Light and shadow are obvious. Lines facing toward the light are thin and those facing away are thick. Usually, light comes from overhead so lines defining the undersides or bottoms of things should be heavier. Mass is also obvious: heavy objects take thicker, bulkier, rougher lines than light ones. Anvils and clouds demand different line weights. Then there's "tension," by which I mean I make my lines thinner where an object is stretched or tight, and thicker where it's loose or full. It's easier to show what I mean with a quick example: 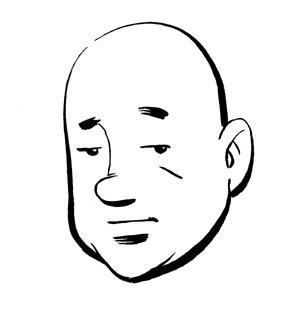 In this drawing, light's coming from above. My line is thinnest at the crown of the head both because it's nearest the light and the skin stretches tight and thin against the skull. In fact, it's so thin the line actually disappears for a bit. Ditto for the bridge of the nose: it's facing the light and the skin is taut. The line is thicker under the nose and lower lip, where shadows fall, and along the jawline, which is both farthest from the light and fleshier. However, it's thinner on the chin itself because the skin is firmer there. The lines defining the sides of the head gradually widen from top to bottom, indicating the transition from light to shadow and also the fact that the face gets looser toward the bottom. This is a slightly saggy middle-aged person; if I wanted to draw a teenager, I'd keep the line lighter toward the bottom because the skin is tighter.

Here's just another quick example showing two identically sized boxes, except the one on the left is hollow cardboard while the one on the right is solid concrete:

I'm not sure how conscious I am of this stuff when I'm inking. It seems like a lot to think about! I know I always start with an awareness of where the light is coming from. The rest just seems to flow. I recall seeing a video of Charles Schulz teaching a cartooning class in the mid-1970s in which he told the students, "when you draw grass, think of grass." I don't mean to get too mystical mumbo-jumbo about it, but I think that's how it works. When I'm drawing cardboard or concrete I think "cardboard" or "concrete," and my brain-hand combo seems to do the rest.

Application, with a Bonus Rant
Now, in addition to thinking about and applying this stuff, you've got to simplify it. Cartooning is distillation, stripping a drawing down to the essential infomation needed to communicate. That's the toughest for me, and where I struggle the most. It's so much harder to draw something with two lines than twenty! I think this aspect of cartooning makes the line even more important as it's tasked with conveying more and more information. An inky squiggle can be a blade of grass, a coyote falling off a cliff, or a brick zipping past at the speed of sound. Only the skill of the cartoonist and the mind of the reader who comprehends the symbols and fills in the missing details gives the squiggle meaning.

What dismays and frustrates me is how few contemporary cartoonists seem to think about this stuff, or even be aware that they can or should think about this stuff. Fifty years ago, this is what professionals did. Understanding line was the bare minimum required to get into the club. Milt Caniff was a hugely influential giant to two or three generations of cartoonists not because "Terry and the Pirates" and "Steve Canyon" were swell comic strips but because he was a master of line. Same with Roy Crane, Walt Kelly, Wally Wood, or any of forty or fifty other greats I could list.
. 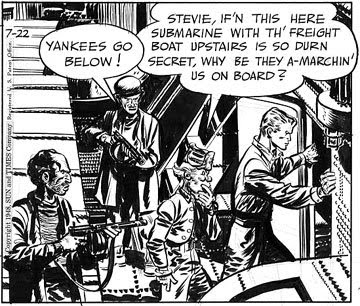 "Steve Canyon" by Milt Caniff. If I had 1%
of his ink-line mojo, I could die happy.
Without naming names or pointing fingers, that doesn't seem to be the case anymore.

It's tempting to pin the death of skillful linework on the rise of digital art--and I think poorly done digital art does have a bland, sterile coldness to it--but in fact some cartoonists (e.g., Darrin Bell) produce very lively lines on the computer. You just have to work at it. But in order to work at it, you have to realize it's worth knowing and doing in the first place. Unfortunately, I fear the art of cartooning has eroded to a state where many of its practitioners don't even know what they don't know. I'm far (way far) from an expert at any of this; the more I learn, the more I realize how ignorant I am. But I'm trying.

Cartooning is hard enough as it is. We've got a hundred years' worth of tools to do the job, many of them hand-forged and left for us by master craftsmen in decades past. Why anyone would toss out and neglect those tools until all they have left in the toolbox is a cracked hammer and bent screwdriver is beyond me.

UPDATE: Re-reading the next day, I realize a lot more could be said about line. This wasn't intended to be comprehensive, just a first stab. In addition to the few variations I described, lines can be bold, tentative, coarse, tremulous, precise, Impressionistic. Each affects the reader. An artist's line can become their signature: the smooth elegance of Al Hirschfeld or nervous scritchiness of Ed Koren are instantly recognizable. Lack of a lively line can also be a style choice. For example, "Dilbert" and "Pearls Before Swine" use very uniform lines that reinforce the bleakness of their universes. Whether or not Scott Adams and Stephan Pastis made that choice deliberately, I think it works for them.
There's a lot to think about. Maybe more later.
.
Posted by Brian Fies at 1:38 PM