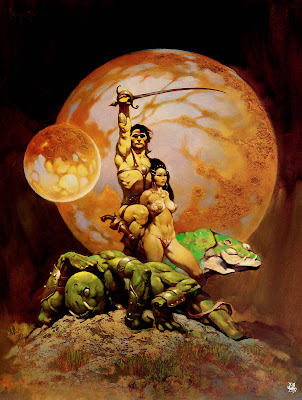 Fantasy and comics artist Frank Frazetta died today. I never met Mr. Frazetta, and was a casual fan in the way that most who grew up reading comics were fans, which is to say I have huge respect but was never an expert or student of his work. I understand why his art is so beloved--one of his original paintings recently sold for $1 million--but I also understand the criticism that, for all his technical mastery, Mr. Frazetta's work remained more illustration than fine art and never really transcended its vulgar pulpy roots.

Not that there's anything wrong with that.

Despite my tepid veneration, I wanted to note Mr. Frazetta's passing by talking about one piece of his that knocked my socks off when I first saw it as a kid, established my personal gold standard for how good comic art could be, and is a little different from all the images that'll be illustrating his obit in the next few days (like the one above). This was a black-and-white drawing originally done for the cover of a Buck Rogers comic book in 1954: 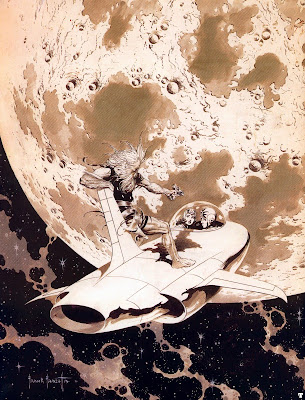 
Wow! Here's some of what I think is going on in this drawing of an alien taking aim at our heroes Wilma and Buck (scholars of Frazetta or the comic-book arts are welcome to correct me). I believe the original is ink on duoshade board, which was a type of heavy paper printed with fine hatching and cross-hatching that only became visible when the artist brushed chemicals on them--one chemical for light shading, another for dark. It was made until very recently, I've played with it myself. Everything that appears brown in this image is light or dark duoshade lines that would've looked gray in print.

This drawing is perfect. Perfect composition; the action is clear, the moment dramatic. Great mix of textures: the shiny smooth ship against the organic veiny hairiness of the alien against the rough rockiness of the Moon against the graceful wisps of nebula floating through distant space. Terrific use of light and shadow. I love the lunar craters and mares, defined not by outlines but by shadows. It's no coincidence that one bright swath of lunar highlands intersects the alien's head, while another points right to Buck's. White against gray against black, all organized to lead the reader's eye to the moment of conflict, where the pure black-on-white starburst on Buck's helmet makes the perfect target for the villain's gun. 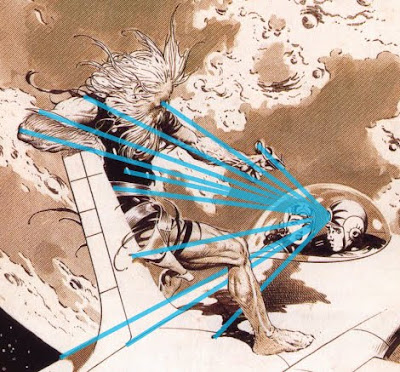 Nearly every line in the alien's body, right down to the alignment of the buttons on his blouse, guides your attention to his (and Frazetta's) target: the head of Buck Rogers.

In addition, Frazetta perfectly balances the triangular shapes defined by the alien and the spaceship itself against the huge circle of the Moon, the circular dome of Buck's cockpit, and the smaller ovals that mark the back of the ship and the eddies in the nebula. That little point of the right wing that protrudes past the edge of the Moon's disk is important: it firmly establishes our little ship in space and, along with the intersecting nebula below it, "hooks" our eye and keeps it from following the arc of the Moon right off the edge of the page. I could go on.

Frazetta will be most remembered for his lush, lurid, fleshy, full-color paintings of barbarian warriors, savage beasts, and voluptuous princesses, and rightly so. But it's his early black-and-white comics work--influenced by Foster and Raymond, inked by Wood--that hit me young and took my breath away. That was really great stuff.

Despite the fact that hundreds of artists have built careers copying Frank Frazetta's style, none has come close to surpassing him. He was one of a kind.

Wonderful post, Brian, and I am especially tickled by your blue-line analysis of the "alien" image.

Yeah, that's gotta be his best image. I think it was reprinted in a Jim Steranko "Mediascene" mag in the 1970s (which I still have). Hard to say enough to praise his qualities as a draftsman -- but your blog, Brian, is spot on.

Wow, I didn't hear about this at all, and I was just talking with a friend about Frazetta yesterday.

Thanks for the great blog post, there really is no better way to celebrate a passing artist than to celebrate his work.

It's funny - when I was a kid, I read all the John Carter of Mars books from the library. The hardcover books gave no impression to me of the physique of John Carter, and I pictured him looking something like Gregory Peck. In my mind, Dejah Thoris was sort of a Vivien Leigh build.

I think Frazetta changed the mental image for many readers. Not sure if that's a great thing - - he was a magnificent artist, but I've been pondering this "freezing" of literary characters for a while.

Mike: See my correction in the text, which I'm happy to make. I don't know where the idea Wood inked the page came from but I didn't invent it. I'll have to go through my references and pin down where I went wrong.

Meanwhile, I'm curious to learn why my post on Frank Frazetta is suddenly getting a ton of hits nearly three years after I wrote it? Who are you guys?

Thanks again for the correction.

Brian - - A friend posted a link to your blog, in a facebook group (a Wood group), which is how I took notice. Nothing against Wood - -love Wood's work, but this isn't Wood's inking, it's Frazetta's. These unsubstantiated rumors need to be quashed when they arise...I believe you, that you found the rumor somewhere and posted it in good faith.. wish you could remember where, but I understand it was a while back...

Frazetta inked all of his own covers. He only collaborated on interiors (I think he did some collaboration with Wood... more often with Williamson) and the only cover collaborations were when Roy Krenkal made rough composition sketches for some of his Warren Creepy and Eerie painted covers.