(This post, a rerun originally posted in my old blog in June 2008, is a favorite of mine.)
.
Many people who aren't from California and have seen too much "Baywatch" are surprised by how agricultural the state is. California's Central Valley is some of the most productive farmland in the nation, and there are small towns a hundred miles from Los Angeles or San Francisco that are as rural as any you'd find in the deepest backwaters of South Dakota (and I pick on South Dakota because I love it). My father-in-law grew up in such a farm town, and it was to that town that Karen and I drove last weekend to attend the wedding of a friend's son.
We arrived several hours early because we wanted to check out a few things and meet Karen's sister and her family for lunch. The town had maybe 2500 people when my father-in-law was a boy working in his father's appliance store, but because it lies on a big highway and is within commuting distance of the Bay Area (it's a two-hour drive each way but some crazy people do it), it's grown to about 25,000. The highway is now lined with a Wal-Mart, Home Depot, Target and the like, which has destroyed the old downtown district three blocks away. Half the storefronts are deserted, the other half you wouldn't necessarily want to go into, but it still retains the architectural bones and charm of its early 20th-century origin. You think, "man, they'd really have something great here if they could just turn it around," but they probably won't and it'll all crumble away and that's the way of things these days.
After lunch, we all went to the local two-room museum because we'd heard there might be something of particular interest to us there. The "open" sign was up but the door was locked and we walked around puzzled, finally finding an unlocked side door that we obviously weren't meant to go through. But it had a bell on it, and we'd just begun to walk away when an 80ish docent poked his head through the door and beckoned us around to the front. He works in the back, you see, and gets so few visitors that it's easier for him to lock the front door and listen for the jingle.
The museum had a genuinely interesting collection of artifacts spanning the town's pioneering days through World War II. It also had what we'd come to see: a poster-sized photo of Karen's father at age 9, standing with his father (Karen's grandfather) in front of the appliance store with two workers, proudly displaying the latest mid-1940s models of Maytag washers. We took some pictures of the picture, which the docent was happy to place on an easel for us, and were talking with the old man when he asked Karen, "Say, whatever happened to your grandfather's rock collection?" Karen replied that her father still has most of it, and we walked away amazed and delighted that this really once was a town where everyone knew everyone else and there were still people sixty years later who remembered when ol' Frank had the best rock collection around.
We were reminded again at our next stop, the town's one antique shop. Like a lot of businesses, my grandfather-in-law's appliance store used to give away things with its name printed on them: calendars, can openers, dolls. A few survive in the family; we figured if we ever had the slightest chance of finding more it would be at the local antique shop. No luck, but we did discover the 90-year-old owner, a woman who'd lived there 70 years and clearly intended to end her days surrounded by stacks of mostly junk. She was a real sweetheart. When we explained who Karen was and what we were looking for, she said, "Oh yes, Frank the electric man! He was so nice!" She told us a few stories about the way the town used to be and how it isn't like that anymore. She's been robbed a couple of times recently--see where they damaged the drawer of the antique cash register with a crowbar?--and when we expressed amazement that she actually kept cash in the old thing, she taught my wife the trick to getting it open. Fortunately, her trust was not misplaced.
It became an unxpectedly heartwarming weekend for us, thanks to a museum volunteer and an antiques dealer who couldn't have been happier to meet my wife--Frank's granddaughter and little Bobby's daughter--and made us a bit homesick for a home we never had.
. 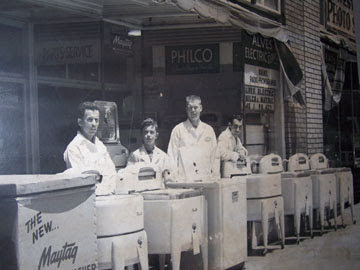