Happy Anniversary to Us 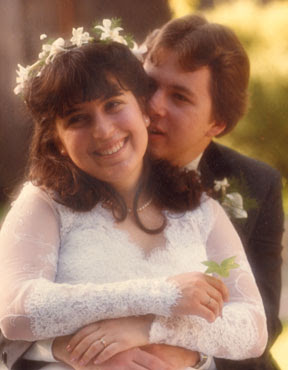 Both the good and bad thing about being married for 25 years is that it sounds like a long time. It's getting to the point where audiences start to applaud. I remember people celebrating their 25th wedding anniversaries when I was a boy, and they were all old.

Well, my hair may have gone gray and thinned a bit from my forehead, but I don't really feel much older than the feckless kid in that picture. Who, by the way, didn't do anything special to make his hair feather out that way, it just did it all by itself, I promise. Why anyone would marry that goofball is beyond me.

But Karen did, back when I was a former bus driver and rookie night-shift newspaper reporter, and she was a former bookstore clerk and rookie social worker. Either we somehow saw great potential in each other despite all evidence to the contrary or just didn't care, but in any case we've built something pretty terrific together. We were stupid (everybody that age is stupid) but lucky.

She got smarter, I got stupider, but I still think I'm pretty lucky. Happy Anniversary, Sweetie. 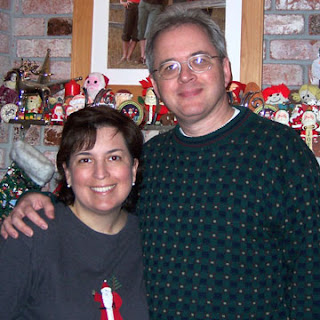 Last Christmas--the most recent decent shot I could
find. We should really take more pictures together.

A social worker and a newspaper reporter? Talk about a recipe for building a financial empire!!! (Congrats, guys)

Wow -- you two have absorbed twenty-five years just extraordinarily well, at least as far as appearance goes. And you, Brian, appear to have grown taller by a head in that time.

Congratulations, both of you, and now you can start dropping hints to your young ladies that you expect a blowout of truly epic proportions on your 50th.

Gorgeous photo! -both of them. Congratulations!

Congratulations, Brian and Karen! Thanks for sharing this personal moment with all of us in Blog world!

Thanks for the good wishes, everyone! And Bren, thanks again for your hospitality.

How did I miss this post? I'm late to the party but Happy Anniversary!