Those attuned to the subtle nuances of my blog (What? Nobody?!) may have perceived that I was on vacation last week (the previous post was written ahead of time and autoposted). As a rule, I don't announce to the entire Interworld that my home is empty and ripe for robbing. Psych.

The girls and Karen and I went to southern California to see family, mark the girls' spring break, and celebrate our wedding anniversary. I think we had a great time, except for a cold that three-fourths of us passed around. I seem to have gotten the worst of it; my theory is that the virus somehow perceived my indomitable Immune System of Steel and attacked me with ten times the virulence it would have fielded against a lesser mortal. I awoke yesterday and announced that if it were a work day I'd've called in sick, but since I was on vacation I might as well get out of bed and make the best of it. We all had so much fun that I think another day would've killed us.

Our trip included a tour of the Getty Villa, which segues into my next topic. Not to be confused with the more famous Getty Center, the Villa is a free museum in Malibu that displays Greek, Roman, and Etruscan antiquities in a large complex whose architecture and gardens are modeled after those of an ancient Roman country home. It's right on the coast, the weather was beautiful, and it was a perfect outing, especially for my girls, who love that stuff. (The museum brochure had a photo of a Grecian urn that, knowing nothing else about it and based only on the artistic style, my daughter Laura dated to 550 BC. When we found it in the museum, it was actually dated 560 BC. So she lost.)

Digression: I think cartooning's history as a low, vulgar art sometimes leads its champions to overstate its pedigree in an attempt to fluff up its reputation. In my opinion, folks like Scott McCloud stretch definitions beyond breaking and don't do us any favors by tracing modern cartooning back to sequential images painted on cave walls and Egyptian tombs. If that's cartooning, then everything is cartooning. I think you've got newspaper strips and comic books in the 20th century, "Punch" and similar humor cartoons in the 19th, and illustrative/editorial cartoons (William Hogarth, "Don't Tread on Me") in the 18th. Push any further back, and I believe you dilute "cartoon" and "comics" into meaninglessness.

Still, I would have a lot to discuss with the anonymous craftsman who painted this Greek pitcher in Ionia in 625 BC. 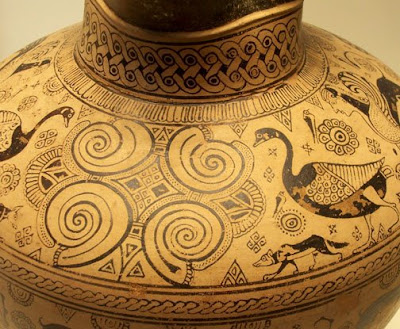 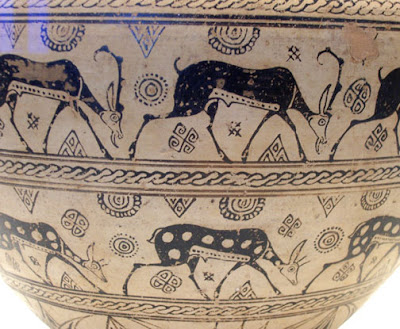 Man. That is just breathtaking grace and expressiveness. The pride of the goose, the slinking cunning of the dog/wolf, the wary elegance of the goats and deer (I don't know anything about ancient animal husbandry; I only label the animals for convenience and trust you can figure out which ones I mean). I especially love the strokes that make up the legs and horns of the goats, with little knobs at each joint and every curve flowing gracefully into the next. In a few bold, confident lines, the artist captured the essence of his subjects.

I envy the guy who drew this. I wish I could cartoon this well. In addition to the figures, the work displays a masterful sense of graphics and design. This style would work in a completely modern context. In fact, the goats look like something Dr. Seuss might've drawn--especially the left one, there's something in the eye. Put this artist in a time machine and he could have a great 21st-century career.

Maybe it was just my mood that day, but this pitcher blew me away. Even more impressive is the fact that it probably wasn't a masterpiece by a top artist--this was just a craftsman doing a day's work, probably paid by the piece, churning out commercial housewares for customers.

I very much like the idea that an artist could reach across 2600 years and grab me like that. I understand this guy. We're solving the same problems. He and I could talk--as I guess we kind of did, though sadly only one way.
.
Posted by Brian Fies at 1:33 PM

You're right, these are remarkably animated drawings. I especially love the goats (and agree the horns are tiny little symphonies of design), and you're right - the resemblance to Dr. Seuss' work is amazing!

I find humor in the placement of the goose and dog. With one more step, the goose will land on the dog's tail.

You might like to check out Chris Alexander's "The Nature of Order" for why this stuff is so good!

Thanks for the recommendation, Anon.