My previous post about the Grecian pitcher reminded me of another work of art I photographed a few years ago (photos without flash were allowed in both cases) because it impressed me in the same way. That introduction already gives up the game, but play along by guessing when this tile was created: 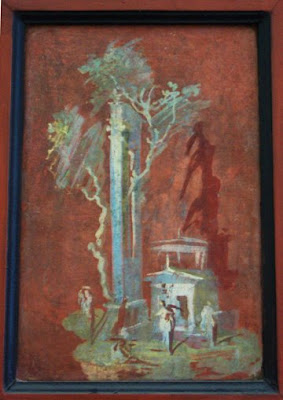 Its vivid colors and abstract shapes make it look almost Impressionistic. Maybe Monet or Degas. Tree limbs are blobby brush strokes, leafy canopies are scribbled squiggles, structures are dashed off in a few bold slashes. The color palette and composition are terrific, with the off-center tree and arch pulling the eye down to the dynamic figure (statue?) at lower right, spotted with dramatically dark shadow against a brilliant white background that makes it the focus of the piece. And then there's that tall reddish-brown shape at center right, which suggests a low-cast shadow or something large looming in the distance, but also looks to me like a woman dancing. This is smart, sophisticated art.

If I'd seen this without any context, I might've guessed it'd been done in the late 19th or early 20th century. It also reminded me of magazine illustrations from around 1950, the golden age of that lost and neglected artform. It's almost lurid. A romantic potboiler. "Love Among The Ruins." The payoff, which you've already guessed, is that this was buried in Pompeii in AD 79. I found it in the Naples National Archeology Museum.

Any cartoonist who can look at this and the Grecian pitcher without thinking they could learn a lot from these artists is either a master or a fool. Unless you're already really, really good, these long-dead craftsmen knew something you don't.