How This is Gonna Go Down 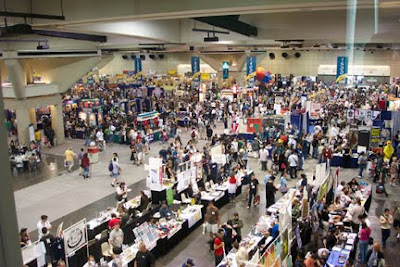 Today is Thursday. I'm leaving for the big 2010 Comic-Con International in San Diego early tomorrow. If everything goes as planned, I should arrive just about the time the doors open Friday morning.

I have a pretty long list of friends and panels I hope to see. The big Hollywood stuff doesn't interest me--I'm there for the comics and will be thumbing through back issues, ogling original art (who knows, if something is priced right it might end up on my wall), and buying a few things that folks back home asked me to pick up. I can also always count on meeting two or three incredible people I didn't expect to find but who will make my day. As Mark Evanier has said, whatever kind of convention experience you want to have is available there--San Diego is like five separate cons all going on in the same space-time--you just have to find it.

My publisher Abrams has a booth (#1216) that will serve as my home base. It'll be great to see Editor Charlie, his wife the Lovely Rachel, and some of the Abrams people I know. I don't have any formal book signings scheduled but will be sure to autograph all of my books on the table (geez, I hope they brought some). If anyone wants to meet me, check there; if I'm not around, leave word and we'll try to rendezvous.

Demands on my time are few, and half the fun of Comic-Con is just wandering around taking in the spectacle. In addition, San Diego is itself a great city, and I plan to spend time doing something few convention-goers do: getting outdoors. My only commitment is to attend the Eisner Awards Friday night, where I'll be vying for two trophies. Here's the competition and my best, most dispassionate estimate of my chances:

My odds: 1%. I haven't seen Sala's work. Tomine's book is both very popular and good, while Orzechowski has been a talented professional letterer forever. Either of them could take it. But Asterios Polyp is simply this year's best-selling 800-pound gorilla that will win every category for which it's nominated, and may even deserve to.

My odds: ~15%. We may have a shot here. Absolute Justice was a well-regarded book that looked good and I think sold well, and if I had to put my money somewhere it'd be on it. The others are very attractive publications. But I don't see an undisputed runaway favorite in this pack, and if the Eisner voters actually looked at how the books were designed, I believe ours stacks up. I'm very proud of WHTTWOT just as a physical object whose form enhanced its content in a way I don't think is true for the others.

So we'll see how that goes. The Eisners start at 8:30 p.m. and will probably end around midnight. In the past, I've sat within a dozen feet of people like Frank Miller, Jim Steranko, and John Landis. Never spoken to them, just breathed the same air. The past couple of ceremonies I've attended have been pretty entertaining in their own right. Win or lose, it should be fun. Winning would be more fun.

Saturday I've spotted another couple of panels I want to catch, and then need to leave for the airport by midday to get back home at a decent time. Some would disagree, but I think a day and a half at Comic-Con is just about right: enough time to cover the exhibition floor and see what you want without going completely brain dead, shuffling through the aisles like a zombie, giant plastic bag crammed with free posters you'll never hang and t-shirts you'll never wear, a chilling mid-distance stare in your rheumy red-rimmed eyes. Brrrr.

Stories, photos, and maybe more to come. I have a few things in mind you might enjoy.
.
Posted by Brian Fies at 1:07 PM

Have a blast Brian. Can't wait to read the reports. We can but live vicariously through you :)

What ronnie said, plus this:

If you get a minute or two during your wanderings tomorrow, you might want to visit booth 3749 and meet Will Decker. I've alerted Steve via Facebook messaging that you might drop by, but to stick around anyway and try to be nice. (That's actually not a stretch for him, if he's like he was when we were in school -- I haven't actually seen him in 41 years.

Of course, I've never seen you, have I?

Directions: "Booth 3749, Shout! Films. It is almost exactly in the middle of the Convention Center and right on the back wall. The Hasbro booth and Hasbro Toy Shop are very good markers. The best floor entrance is Lobby D. Starbucks is near the entrance so if you see that, go onto the floor & walk toward the back door."

Let's be careful out there!

And I wish you all my hopes that you get an award!

Please find the strangest costumed freak and have your picture taken with them. The more bizarre the better. That way when people chide you on going to these things you can pull this out and say "Look! there are wierder people there than me"

I read today that the lovely people of Westboro Baptist Church (the "God Hates Fags" cretins) are picketing the event. I am sure Brian could not find a stranger, more costumed freak than one of their bunch.

I have nothing to add. Just wanted to see if I, too, would get "nummiest" as my Google Word Verification.

Damn. It's "auntl," whatever the hell that is.

Brian, may you be as bad at handicapping the odds as you are as good at lettering your novels! Excelsior, dude.

As we wait in suspense for this evening's results...

Mike, I think "auntl" is what Barbra Streisand's nieces and nephews call her. If she has any.

scroll down if you don't want to know until Brian tells you...

Sadly for us, WHTTWOT didn't win either category. Happily for Brian and his bookie, though, his prognostications were absolutely right on.

Not that it confused anybody, but that should have been "Don't scroll down..."

Some of us really, really need an editing function in comments.

Did I guess the winners right? I kind of blacked out there a couple times and can't recall.

Win or lose, Comic-Con is always an over-the-top experience and this one was no exception. Mostly good, some extraordinary. As soon as I unpack my bag and upload some pics, I'll be blogging some stories. And I tried something fun this year that I think you might enjoy. Y'all come back now.

Thanks for your support!