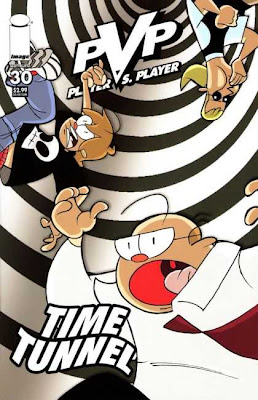 Following up on my previous Comic-Con post-mortem, this is the first of six Two-Minute Interviews I did with five friends and one complete stranger in San Diego. The idea was to capture a spontaneous conversation about comics that I hoped would be interesting and fun. I'll post one a day for the rest of the week.

Scott Kurtz is the creator of "PvP" ("Player vs. Player"), which is among the most popular and successful webcomics in the universe. Scott won the Eisner Award for Best Webcomic the year after I did. Most remarkable is that Scott has figured out how to make a living at it, an accomplishment that has eluded 99.94% of webcomics creators. He shared some of his insights in a book he co-wrote, How to Make Webcomics.

I met Scott last February when he came to town to spend a day as the Schulz Museum's cartoonist in residence, something I'd done the month before. I was wary. In online message boards and such, Scott has a dynamic presence. He speaks his mind bluntly, sparks arguments, fuels fueds. So I was expecting a real bomb-throwing fire-breather when we met for dinner after his engagements at the museum.

I might as well tell that story now, although I didn't at the time. Scott was staying at the guest house of Jeannie Schulz, Charles Schulz's widow. I don't think Scott was special in that regard; my impression is that Mrs. Schulz opens her home to any vagrant cartoonist passing through. Jeannie wanted to host a little gathering for Scott and invited a small group of local cartoonists including me, whom she'd just met a month before. My wife Karen and I drove out to her home not knowing quite what to expect, and were delighted to find a very comfortable, casual meal of pizza and salad, accompanied by horsing around on the Schulz's indoor basketball half-court.

It was a wonderful, slightly surreal evening I'll never forget, during which I met Scott, his wife and his father. Given what I'd seen of Scott's online persona, I was surprised to find him even-tempered, warm, thoughtful, sensitive, and very nice to talk with. We bonded pretty quickly over shared experiences and approaches to cartooning. An instant friend. Not that he needs my endorsement, but Scott Kurtz is all right by me.

With that intro, I hope you enjoy my Two-Minute Interview with Scott: