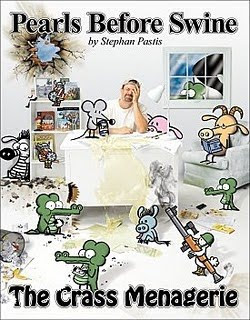 When Whatever Happened to the World of Tomorrow came out last summer, I had the idea of hosting a live webcast "virtual launch party" to celebrate. I figured I'd show off the book, do some drawing, maybe take some Q&A, and I invited Stephan to drop by as a Very Special Guest. He said he'd be happy to do it, on the condition that he could be the Worst Very Special Guest Ever. He was as good as his word. Stephan brought beer, Cheetos, balloons, a paddleball, and a blatantly disruptive attitude to the party, and made it a . . . magical . . . evening.

With that background, here are two minutes with Stephan Pastis. See you on the other side.

Not everyone knows that Stephan works part-time for Creative Associates, the studio that oversees the "Peanuts" empire built by Charles Schulz. Cartoonist Paige Braddock, who makes a cameo in the Two-Minute Interview, is Creative Associates' creative director. That explains why they both participated in a Comic-Con panel on "Peanuts at 60." (As I mentioned in my post-Con post, I tried to get in to watch that panel but the room was over capacity, which was nice to see.) The new animated special that Stephan co-wrote is the upcoming "Happiness is a Blanket, Charlie Brown," which will feature Linus.

The idea of the man who created the cynical, misanthropic Rat putting words into the mouth of the wise and sensitive Linus unnerves me. But then, Stephan also created the wise Goat and sensitive Pig, so perhaps he has it in him after all. He is a man of hidden talents. He's also a good guy, but don't tell him I said so. I'll surprise him with it at 9 a.m. next Sunday.

I keep hoping that somehow, somewhere, Stephan will do a public reading just so I can hear how the crocodiles accents are supposed to be read aloud. I waver between Boris Badinov and Signor Wences.

This sucked. Too bad you couldn't interview a more interesting cartoonist, like Paige Braddock or someone.

But I don't know Paige well enough to insult her.