An Appreciation of the Women of Tomorrow

Suzette Chan of Sequential Tart, a website that has been very good to me over the years, has written a really nice review that touches on the women of Whatever Happened to the World of Tomorrow: Officer Mooney from Cap Crater's "Space Age Adventures," and the nameless little girl at the end who's eager to carry on the next generation's adventures. I had no idea this piece was coming and it was a nice surprise to find it this morning.

Suzette launches from a 2009 interview I did with MK Czerwiec (Part One, Part Two), also for Sequential Tart, in which I said I felt a little guilty that the main characters of WHTTWOT were all male (as I recall, I also said that since almost everyone in Mom's Cancer except me was female, I didn't feel too bad about it). Suzette looks at some of my book's themes with an eye on the women of the World of Tomorrow, an angle I don't think anyone else has considered.

Rather than recap Suzette's short piece, I'll just add a few thoughts about my intentions when I created those characters. Officer Mooney is the voice of reason, as well as the voice of the reader who might wonder why the police need a guy who commutes from the Moon to help them solve every little problem. I think she's the smartest character in the book--Dr. Xandra has greater raw evil-genius brainpower, but Mooney has more street smarts and common sense than all the rest of them put together (for example, when the gang goes out to investigate Dr. Xandra's uranium mine, she's the only one who remembers to bring a gun). And, as Suzette notes, the gag is that through the years Mooney is gradually promoted until she becomes the ineffectual Chief's boss, a nod to women's progress in the real world through the same decades. 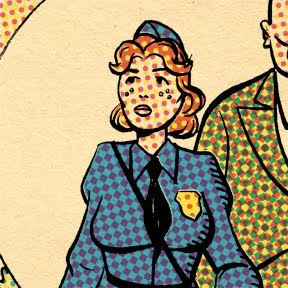 The blonde girl came about because I wanted a kid in the final chapter to suggest a new generation with a new vision of its own World of Tomorrow, building on the successes and failures of its predecessors' vision (which is to say, mine). The idea of making the kid a boy had some appeal--generations of men passing a legacy of optimistic futurism down from father to son, etc.--but pointing out that a girl could also be part of such a legacy appealed to me. But mostly the girl is my daughters, who used to look just like her and to whom I dedicated the book. Do whatever you want, be the best you can be, shape your own destiny, yadda yadda. 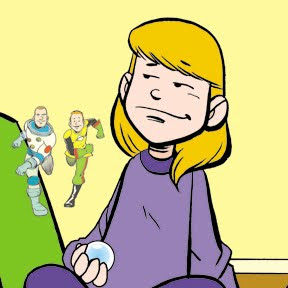 Thanks to Suzette and strong, smart women everywhere. I love them so much I married one.
.
Posted by Brian Fies at 8:12 AM

This is awesome. I noticed Mooney's career progression when I initially read the book and thought it one of the many wonderful little Easter Eggs sprinkled throughout a really wonderful and multi-leveled book.

I also loved the fact that a little girl inherits the future and guessed that that was partly a tribute to your own girls. Very, very nice.