Coolest Photo of the Year

... so far. Courtesy of Bad Astronomer Phil Plait, whose blog is a regular stop of mine, comes this gorgeous image of the most recent full Moon shot in France by astrophotographer Thierry Legault: 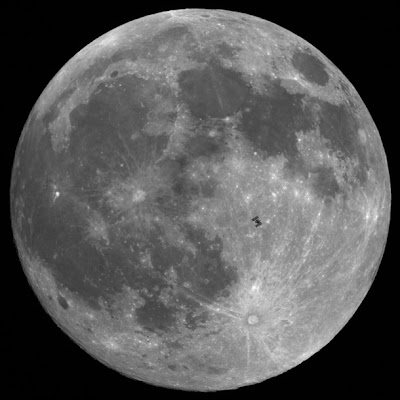 So that's a nice enough pic of the Moon, I guess, but what elevates it to "Coolest Photo of the Year (so far)" status? Just that little dark blotch directly above the bright crater Tycho: 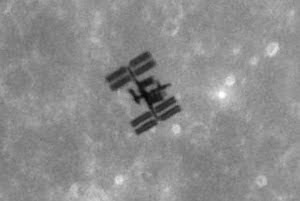 That's the International Space Station, whose orbit Legault researched and then set up his camera in the right place at the right time to capture the half-second it took the station to zip across the lunar disk. The station is about 250 miles (420 km) away, the Moon about 900 times that far. For comparison, here's a recent NASA photo of the ISS from space, which I've rotated to about the same orientation: 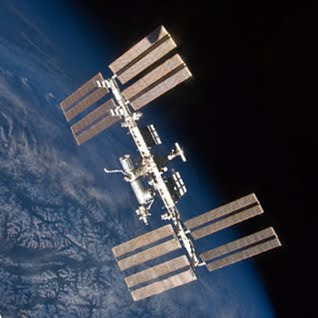 The ISS has been an amazing revolution in space. Since November 2nd, 2000, we've had a continuous human presence in orbit, on board the station.

It's more than just a station - it's now a port of call, a harbor for smaller vessels in orbit. The early docking maneuvers required to connect with the station are about to be replaced with berthing operations. Ships visiting the ISS will be plucked out of the sky by the station's remote manipulator arms and plugged into ports along the axis of the ISS. The sheer size of the station makes this protocol a safer and more economical practice.

A few months ago one early morning, I caught the ISS and Shuttle Endeavour separating from each other as the Shuttle began its trip home. The difference in size between the now-tiny Shuttle and the huge ISS is enormous.

Although I'm sorry we haven't been back to the Moon, I'm still glad to live in a time when people build such things.

That space station is a scene stealing ham!

Jim, always appreciate your perspective. Someday we could have an interesting and maybe enjoyable discussion about how awesome/pointless the ISS is. On balance I guess I'm a supporter and fan, but it's a close call for me. In any case, I completely agree with your last sentence. I constantly feel privileged to be alive to witness this era of space exploration, and know that people centuries from now will envy us.

Namowal, that's great! If you go to Legault's website (to which I linked in the post) you'll see that the ISS is a favorite subject of his.

Brian, I agree that the ISS is a mixed blessing, but there are two points to ponder when considering the benefits of the ISS. First, the ability to examine the long-term physiological effects of spaceflight has been unmatched by any previous experience, including the Soviet/Russian station work. Second, the limited NASA budget money applied to the ISS doesn't disappear when a program is curtailed or suspended, such as the sad lesson of the Ares project.

In terms of misapplication of NASA budgets, I'm more upset with the continuation of the Shuttle program. Every time there's a launch of one of these outdated, dangerous ships, I worry they're tweaking the dragon's nose and tempting fate. Rewriting the safety manual for each launch and flying high-pressure, low-temperature vessels long past their due date is not the way NASA should be running a space transportation system.

I think I'm starting a rant here, so I'd better stop before my eye gets all twitchy like Inspector Clouseau's boss in the Pink Panther movies.