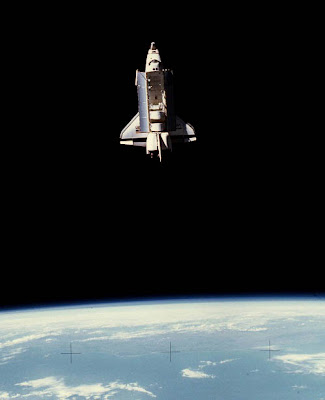 I hadn't planned on writing anything about the 25th anniversary of the Challenger disaster. I didn't think I had anything new or interesting to say except that it was one of the big kick-in-the-guts moments of my life. The above picture of Challenger, which I consider a Top-Ten man-in-space photo, still hangs in my office. 'Nuf said. But some other people's remembrances got me thinking about it, and then a couple of hours ago I got a Facebook-friend request from someone I worked with that day who was prodded by the date to look me up 24½ years after we last spoke.

My old co-worker/new Facebook friend and I were reporters at a small newspaper in central California. It was an afternoon paper with a morning deadline (9 o'clock as I recall), and we had just sent that day's issue to press and were heading out the door to work on the next day's stories when the receptionist called out, "Hey, did you hear the space shuttle blew up?" I chuckled that a shuttle was scheduled to go up, and surely she'd heard wrong and gotten confused. But we turned around and went back to the newsroom just in case, and then I don't remember what happened. There was no Internet; we were getting live text dispatches from the Associated Press reporter on the scene. Very brief at first, just a couple of sentences. The reporter was rattled; they weren't well written. Then, gradually, more detail. Early photos. Someone found a TV that stayed on the rest of the day.

I don't think anyone literally yelled "Stop the presses!" but they were nonetheless stopped. We had a paper to deliver in a few hours, very few actual facts to report, and virtually no local angle to cover. Since I had a physics major and wrote a weekly astronomy column for the paper I was the de facto "science guy," and I called some former professors of mine for comment, mostly so we'd have something to print. We filled the top half of the front page with an AP photo, patched together what little we had, and put it to bed. The next day I wrote a first-person column for the editorial page trying to put the disaster in perspective. At the time I thought it was the best thing I'd ever written, although I was also a 25-year-old goober so in retrospect it probably wasn't. I'm afraid to look.

Working frantically at my little desk in a little newsroom for a little newspaper in a little city, I'd witnessed--and helped report--history. One of my great moments in journalism. Big whoop.

I can't believe it's been 25 years, and I still can't watch footage of the explosion without welling up a bit. It was a devastating blow.

That's my Challenger story. Just one of millions.
.
Posted by Brian Fies at 12:56 PM

I'd bet that what was foremost on your mind then, right up to the hour of the disaster, was the Voyager 2 encounter with Uranus. Closest approach -- head-on to the system, not edge-on as with Jupiter and Saturn -- was only four days earlier, and the puzzling results were still in the very earliest stages of interpretation, but, understandably, after the 28th it was almost as though the encounter never happened.

Yeah, that's right. Interesting synchronicity. I recall that Voyager discovered a bunch of new Uranian moons that some wanted to name after the Challenger astronauts. I felt pretty churlish trying to explain why I thought that was a bad idea.

I loved the Voyagers. Maybe the biggest bang for the buck in the history of space exploration.

I think you could take the word "space" out of the last sentence and it would still be true.

The "local angle" I could think of for central California was the immediate end (before it even began) of California-based manned spaceflight. I guess it wouldn't be obvious that day, but the loss of Challenger closed the door on USAF Shuttle launches from Vandenberg. A shame, too - - they were about 80 days out from their first launch.

Would have been interesting to see a Shuttle polar flight - - that mission was why the Air Force championed the Shuttle's outsized engines, giant cargo bay, and of course the external tank piggy-back design that doomed the crew.

The anniversary reminds me lately about how there are still two, or possibly three more flights. I wish these ships were already parked in museums somewhere. No one who watches these launches feels comfortable to the "go at throttle up" calls to this day, and it's been a quarter century. I realize there's an inherent risk to space exploration - - it's the *unnecessary* risks that scare me.

California's big. Vandenberg was about 400 miles away and we were just a wee little newspaper. I've ridden Amtrak (the Coast Starlight) past what I guess would have been the Vehicle Assembly Building and it's impressive and sad. What could'a been.

Yeah, "Go at throttle up" clenches me every time. All I can say about the Shuttle design is that a lot of smart people thought it was a good idea at the time (and others didn't). Costly lessons.

Following 9/11, some reporter got in trouble for saying publicly that it was fun to cover -- he didn't use the word "fun" but I forget what word he did use - exhilarating or exciting -- or maybe he just said, "This is why we go into this business."

Well, it is all of those things, up to the moment when you are finished and the adrenalin seeps out and you start to feel it, not as a journalist, but as a person. It's hard to explain how you can be the one without losing sight of the other, and it's essential that you do that, but if one dominates the other at the wrong moment, either way, you've blown it.

I suspect that, if you did go back and read it, you'd be proud of the little goober.

(Everything I just wrote Walter Cronkheit expressed simply by taking off his glasses.)