Editor Charlie alerted me to a good interview at The Graphic Novel Reporter with Neil Egan, the talented Abrams designer who helped make Whatever Happened to the World of Tomorrow a better book than I imagined it could be. Neil notes that he and I were co-nominated for an Eisner Award for Best Publication Design, which was a thrill for both of us. And he's a great guy, which is always a plus.

Although Neil and I worked closely by Internet and phone during the production of WHTTWOT, we didn't really sit down and talk in person until I made my way to New York long after the book had been published. Odd, isn't it? Creating a book can be an intense, intimate experience during which you really get to know someone you don't actually know at all. Can't argue with the results.

Congratulations to my friend Neil for some well-earned recognition. I hope we get to work together again soon. 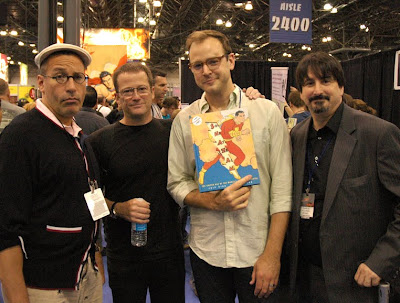 Surfing for an interesting photo of Neil, I found this of three men who contributed to WHTTWOT and one I've seen in his underwear. From right to left are my editor Charlie Kochman, designer Neil Egan, and photographer Geoff Spear, who shot the fine professional photos of the 1939 World's Fair pennant and Futurama pin that illustrate my book. At left is celebrated designer/writer/editor Chip Kidd, who wrote the "Shazam!" book with which they all posed at the 2010 New York Comic-Con. Photo by Abrams's Chad Beckerman, stolen without permission. But we're all pals, right?.