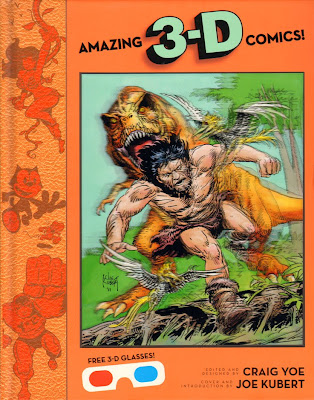 Just arrived in my mailbox is the new book Amazing 3-D Comics, edited and designed by Craig Yoe with a cover and introduction by the great comic book artist Joe Kubert. What a terrific book: a joyful, energetic, thoughtful celebration of the red-blue 3-D comics of the early 1950s, with both Kubert (who helped invent them) and Yoe providing historical context and technical insights into the process, along with pages and pages of actual 3-D comics carefully remastered by Yoe.

Incidentally, that link above goes to an Amazon page with a cover image that looks nothing like the actual cover. In fact, I couldn't find a decent image of the real one online and had to scan my own, which I think had the accidental benefit of capturing some of the 3-D quality of Kubert's beautiful lenticular cover image, one of the nicest I've seen.

I know Craig Yoe through Editor Charlie (Craig has done books for Abrams, including a great one on the comic strip Krazy Kat and its creator George Herriman) and I've never met anyone with more passion and appreciation for old comics, the more obscure the better. He's a writer, designer, publisher, creative director, historian, and unique character (I don't think he'd mind me saying that) who recently gave me a ton of free advice for Mystery Project X that I appreciated very, very much. He also told me how much care went into printing Amazing 3-D Comics, including the use of two extra Pantone inks (not cheap) in addition to the usual cyan, magenta, yellow and black, to try to present these comics in their best light.

In my opinion, Craig's hard work and attention to detail paid off. I thought Amazing 3-D Comics was a beautifully designed book that perfectly balanced information and entertainment, curated by two of the most qualified people on the planet. I read it with a smile and enjoyed it a lot. 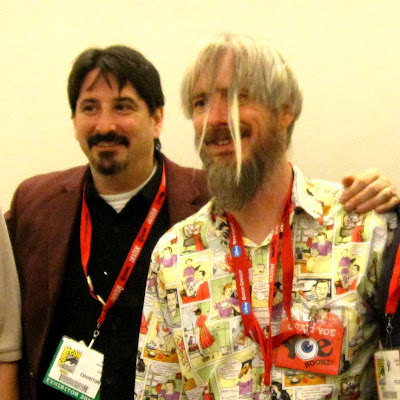 I couldn't find a photo of Craig Yoe with me, so here's one I took of him with Editor Charlie instead. Craig's the one with superior taste in shirts.