Team Cul de Sac is an effort by cartoonist Richard Thompson, creator of the comic strip "Cul de Sac," and others to raise funds for researching Parkinson's Disease, which Richard has. Working with the Michael J. Fox Foundation, Team Cul de Sac had the idea of asking other cartoonists, illustrators, animators and artists to donate art for a book and auction. What kind of art? As the original announcement said:

"The theme is going to be fun. It's your take on the Cul de Sac characters. Please run with them; deconstruct them, parody them, confuse them, cubisize them, psychoanalyze them, draw them in your own strip, whatever tickles your fancy. Enjoy. Open up your heart just create something out of the ordinary, maybe not your own characters, this is for you to let your talent to shine in a wide range of ways. Please write a little text if you would. Not necessarily about PD, but inspiration, technique, influences, determination, strength, spirituality, etc."

So I did, and so did a lot of other people--maybe more than they expected. Many syndicated cartoonists such as Stephan Pastis, Mort Walker, Greg Evans, Jim Davis and Lynn Johnston donated pieces. "Calvin & Hobbes" creator Bill Watterson emerged from retirement to paint a picture for the cause. The deadline was several weeks ago, and Team Cul de Sac organizer Chris Sparks just shot a little video showing a conference room stuffed with submissions. I found mine at 1:25, right after Chris says, "and then there's more." There sure is! Maybe more than they can use; I wouldn't presume they'll all be in the book, and if mine doesn't make the cut that's fine. Maybe it'll raise a few bucks anyway.

Unfortunately, you can't see much of my piece in the video because my cover letter's clipped to the front of it. Fortunately, I scanned it before I sent it off: 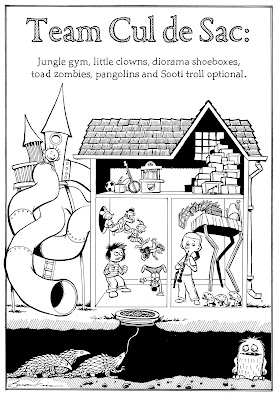 If you're not familiar with "Cul de Sac," which I believe is the best newspaper comic currently in print, the girl and boy inside the house are Alice and Petey, and the chaos around them invokes episodes and recurring themes from the strip. Pangolins, those scaly armadillo things which are Alice's favorite animal, are a lot of fun to draw! In fact the whole thing was a hoot, and I appreciated the opportunity to play in Richard's sandbox for a bit.

I'll be sure to post information about the auction and book project as they come. Team Cul de Sac is good people working for a good cause and I'm proud to make a little contribution.
.