Who'd Ever Want to Escape Such a Cool Place?

I spent last night with my daughter Laura on the decommissioned aircraft carrier USS Hornet, working on a neat special project I may blog about someday. Not comics related, but definitely up my alley.

I've written about the Hornet and my girls before (most recently here). Both Laura and Robin have volunteered on the floating museum in Alameda* for quite a while, and Laura more recently earned a paid staff position as the museum's official Archival and Collections Manager. Commissioned in 1943, the Hornet served in World War II, Korea and Vietnam before ending its career as the recovery vessel that plucked Apollos 11 and 12 out of the Pacific. Due mainly to a dearth of funding, it's only been gracefully preserved without being tastelessly tarted up, a fate I hear has befallen other old ships. A tight budget may be the best thing that ever happened to it. Most of the ship feels like the crew just left yesterday.

Anyway, because my girls often chaperone groups that stay aboard overnight, they have their own officers stateroom. And because Laura is an important staffer who sometimes needs to come and go at odd hours, she has a key to the front door.

I just want to repeat that because it's so cool: my daughter has a key to the front door of an aircraft carrier. In other words, the potential to start World War III now rests in the hands of a 24-year-old grad student.

All this is prelude to a word picture I'd like to paint. It's a beautiful evening on San Francisco Bay. A stiff westerly breeze chills the air but doesn't penetrate the ship's sheltered fantail (a small deck at the stern beneath the overhanging flight deck). Across the bay, the sun angles down a deep blue sky to set behind the SF-Oakland Bay Bridge, Coit Tower, the skyline of San Francisco. A blimp hovers on the horizon, probably covering a Giants baseball game. The ship is closed, the public gone. There's no one aboard but me and my kid (not literally true; there may have been four or five others--maintenance, security, an administrator--but on a vessel the size of a small skyscraper lying on its side, close enough).

But what am I thinking?! Why paint a word picture when I took real ones? 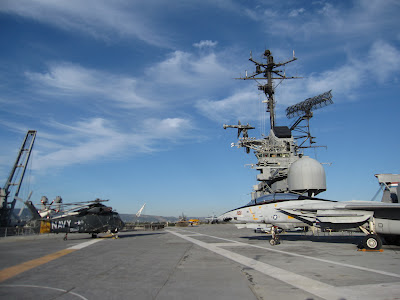 IF YOU WANT a closer look at the Hornet, check out the new TNT series "The Great Escape" next Sunday night, July 1. The premise of the show is that three teams of two people are imprisoned in a strange, foreboding environment and must find clues and solve puzzles planted by the TV crew to escape. Guards can catch them and send them back to the start. Last week's premiere was set on Alcatraz. Next week's episode is on the Hornet.

Both my girls helped with the planning and production of this episode several weeks ago. One of their roles was to guide camera crews through the maze of ship's passages and short cuts so they could race ahead of the contestants. They never appear on camera but saw a lot of the program's "B-roll" (background and atmospheric) material being shot, and had a great time. Here's a commercial, which mixes footage from the Alcatraz, Hornet, and future episodes:

It seems like kind of a dopey show, but you can bet I'll be watching the next one.

I love having an aircraft carrier in the family.


* Where they keep the nuclear wessels.
Posted by Brian Fies at 12:49 PM

Can't believe you didn't go with "HORNET +2" for the caption of you and Laura.

Holy smokes. Your girl has the key to the flippin' HORNET! I am duly impressed.

(and if she let you climb inside the Apollo, you can't tell anybody, I know.)

Hornet + 2! If I change the caption and delete your comment so no one knows you thought of it, no hard feelings, right?

Important to note she doesn't have the ignition key, but still...I'm impressed, too.

I did not climb inside the capsule. With great power comes great responsibility. Spider-Man taught me that.

And now you have mail.