I Am a Fangirl 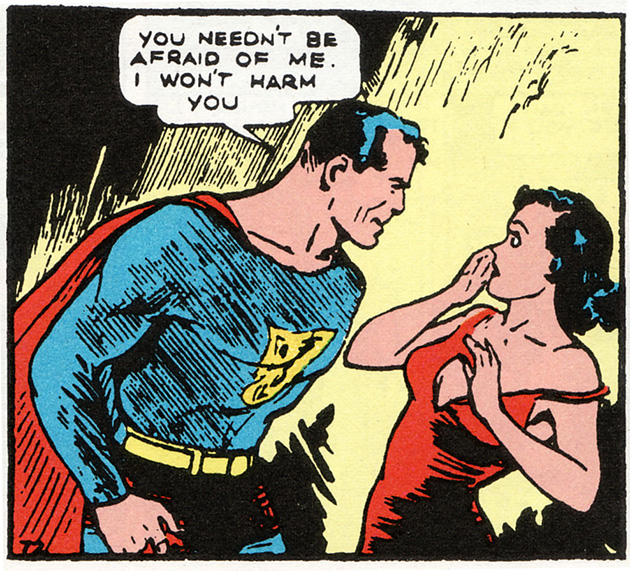 Comics has a female problem. Girls and women don’t always feel welcome. They bring uninvited baggage, like feelings and opinions. They create and buy the types of stories they want to read. Even worse, sometimes they create and buy ours. Giggling, squealing fangirls have invaded the clubhouse, and some of us boys don't like it.

A recent flare-up ignited when writer, editor and critic Janelle Asselin wrote a piece analyzing the cover of a “Teen Titans” comic book. Among other artistic and thematic criticisms, she noted the unnaturally large and bulbous breasts of the teen character Wonder Girl. Expressing that opinion brought her a deluge of anonymous mockery, intimidation, rape threats and death threats, which resulted in a backlash of reflection, accusation and condemnation (as from Andy Khouri and Heidi MacDonald).

Just to be clear: we’re talking about telling a stranger she deserves to be raped and killed . . .

. . . because she didn't like the cover of a “Teen Titans” comic book.

Back in February, cartoonist Noelle Stevenson drew a comic about visiting a local comic book shop to support her friends’ work and being mocked by staff who asked if she wanted to buy a “My Little Pony” book while she was at it. Stevenson is one of the hottest talents in comics right now, and her webcomic “Nimona” is a regular stop of mine. She creates the content that keeps those jerks’ shop in business, yet they humiliated her and chased her out the door.

How bad a businessperson are you when you antagonize the source of your product and half your potential patrons (not to mention getting stuck with a pile of “My Little Pony” comics you’ll never sell)? Those people aren’t girls with cooties, you imbeciles; they’re customers with cash.

Last December, writer and TV producer Paul Dini explained that DC’s “Young Justice” cartoon was canceled because it was popular with girls. Turns out the network executives don’t want girls watching superhero cartoons because they believe boys buy more toys. By the way, anybody seen any sales figures for “Frozen” merchandise lately?

It’s all been echoing around the Web for a while and I didn’t say anything because the difference between right and wrong seemed obvious and I had nothing interesting to add. There are immature maladjusted asses in every group, their cruelty sharpened by the anonymity of the Internet, and maybe guys reading “Teen Titans” comics in their thirties and forties have more than their fair share. Then yesterday I came across a post by Allison Baker of Comic Book Resources inspired by this t-shirt she found at the just-done WonderCon in Anaheim:


Now you just made it personal, pardner.

I have two daughters who’d probably fit some guys’ definition of “fangirls.” Long-time readers know their names but I won’t mention them here because they don't want professional contacts googling up their personal interests, and I respect that. They came to fandom through anime, manga and video games, and love the Marvel movies. They’re writer/artists who’ve won prizes for their manga (with no help from Dad). They sell homemade crafts, sewing, and pinback buttons at conventions. They cosplay. They and a group of their friends do skits.

I may have had something to do with their interest. In addition to being a semi-pro cartoonist, I’ve been a comics fan as long as I can remember. I discovered “The Avengers” when I was 12, and began collecting new issues and buying back issues until I had every book from the original series’ 400-odd-issue run. Forty years later I’m a father, my daughters and I can go see a terrific “Captain America” movie, and I can pull a copy of “Avengers #4” from a box in my closet and show them how Stan Lee and Jack Kirby defrosted Steve Rogers in 1964. And then I can tell them the ridiculous part of the story that nobody remembers--how Cap saved the Avengers from an asparagus-headed alien who turned them all to stone, and how years later, in a nod to old fans, John Byrne destroyed the entire planet of the asparagus-headed people during the X-Men’s Dark Phoenix Saga.

That’s how big a nerd I am.

Do you understand what a neat thrill it is to share something like that with your kids? How much fun I had helping them design a booth or build an Iron Man arc reactor? Their Avengers aren’t my Avengers, but it’s all the same thing. Can’t everyone see that it’s all the same wonderful four-colored pulp-papered globe-spanning multi-generational star-spangled thing?

My daughters approach fandom constructively, creatively, in a spirit of community and fun. They write, draw, sew, build, perform, and sell enough at cons to pay for their table. It would break my heart to have anybody scoff at them, question their passion or commitment, or accuse them of being less of a fan because they express it differently. More than that, it would enrage me.

I’m not nerd royalty. However, I’ve published two graphic novels, won some industry awards including an Eisner and Harvey, and am nominated for a webcomic Eisner this year. I’m at least nerd-royalty-adjacent. I may be a nerd-duke or nerd-earl. That and a quarter will buy me a gumball, but I’m establishing my bona fides so I can proclaim by the non-existent powers vested in me: my daughters are better, more authentic fans than the fangirl-hating asses. The haters may know more trivia, but at least my girls paid attention when their fictional heroes championed honor, decency, courage and compassion. What are these stories about if not that?

How could you claim to be a true comics fan without some of that rubbing off?

What are you so afraid of?
.
.
EDITED TO ADD: In the comments Walter cited this video, which is as on-point as it could be. The issue's been around a while and can't go away soon enough. There's no club, no selection committee, no secret handshake or by-laws. To paraphrase Vonnegut, you've just got to be kind.

Brian; well done and from the heart. It's nice to hear another voice in this discussion.

You saw this video, right?

The Doubleclicks wrote "Nothing to Prove" about being dismissed as fans and geeks because they were girls. They asked for volunteers to contribute to the video and this is what they received.

Thanks Marion. Walter, I'm sure I saw that when it came out but forgot. Thanks for contributing it to the discussion.

Sadly, this attitude knows no bounds. As part of my job I drive a forklift. Every time a truck pulls up the driver will either dismiss me completely or express deep dismay that I will be unloading his (always his) truck. After successfully completing the job they always exclaim in surprise "Wow. I didn't think you could do it." Hate to break it to them; it's not the hardest part of my day by a long shot.

Thanks for sticking up for us Brian.

Repay me by teaching me how to drive a forklift sometime.

Well, after stumbling on your blog after googling my own last name, I have to say.. I approve of sharing a last name with you, firstly. Secondly, I've all ways found it amusing to see a male react to me when I stand up. I'm 5'11", normally taller than they are, learned to drive in a Jeep that had two lifts put on it, not to mention a stick shift, and never failed to be physically strong. The male/female concept is grossly outdated, and entirely laughable in this day. Anyhow, thank you for sharing, and kudos on the last name. c;
-E. Fies

Thanks for reading and commenting. It's always nice to meet another member of our tiny tribe.