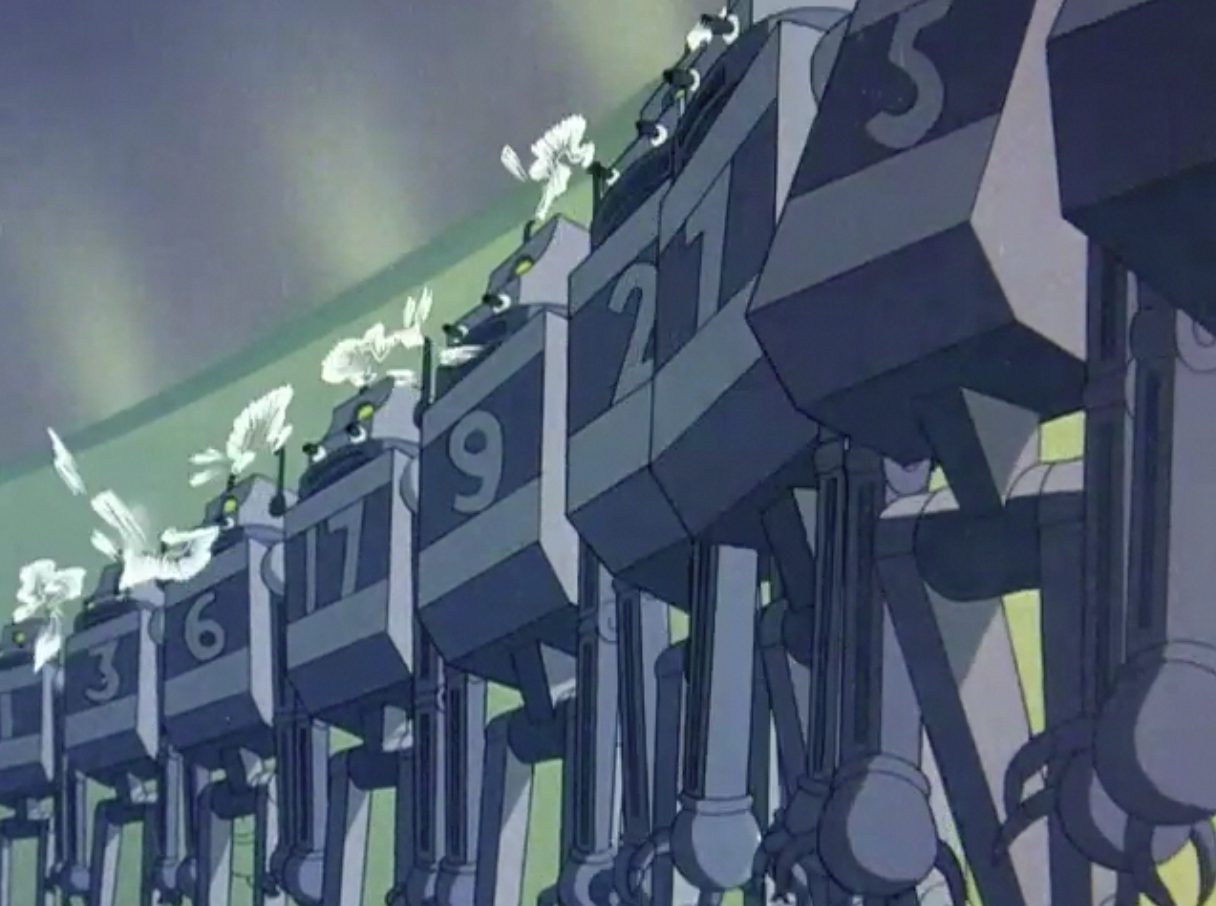 The six long-time readers of this blog know that I like using and making models for my comics work. In the case of the Art Deco rocket I built for WHTTWOT, I actually managed to infiltrate photos of the model into the book itself. That was a lot of fun.

It stands about 17 inches (43 cm) tall and began life as a 4-by-4 and assorted wood scraps in my garage, including a couple of pieces left over from the rocket. It turns at the neck, waist and shoulders, but not at the hips, knees or elbows. Its antennas are toothpicks, its eye a marble, and its claws are molded from Sculpey. 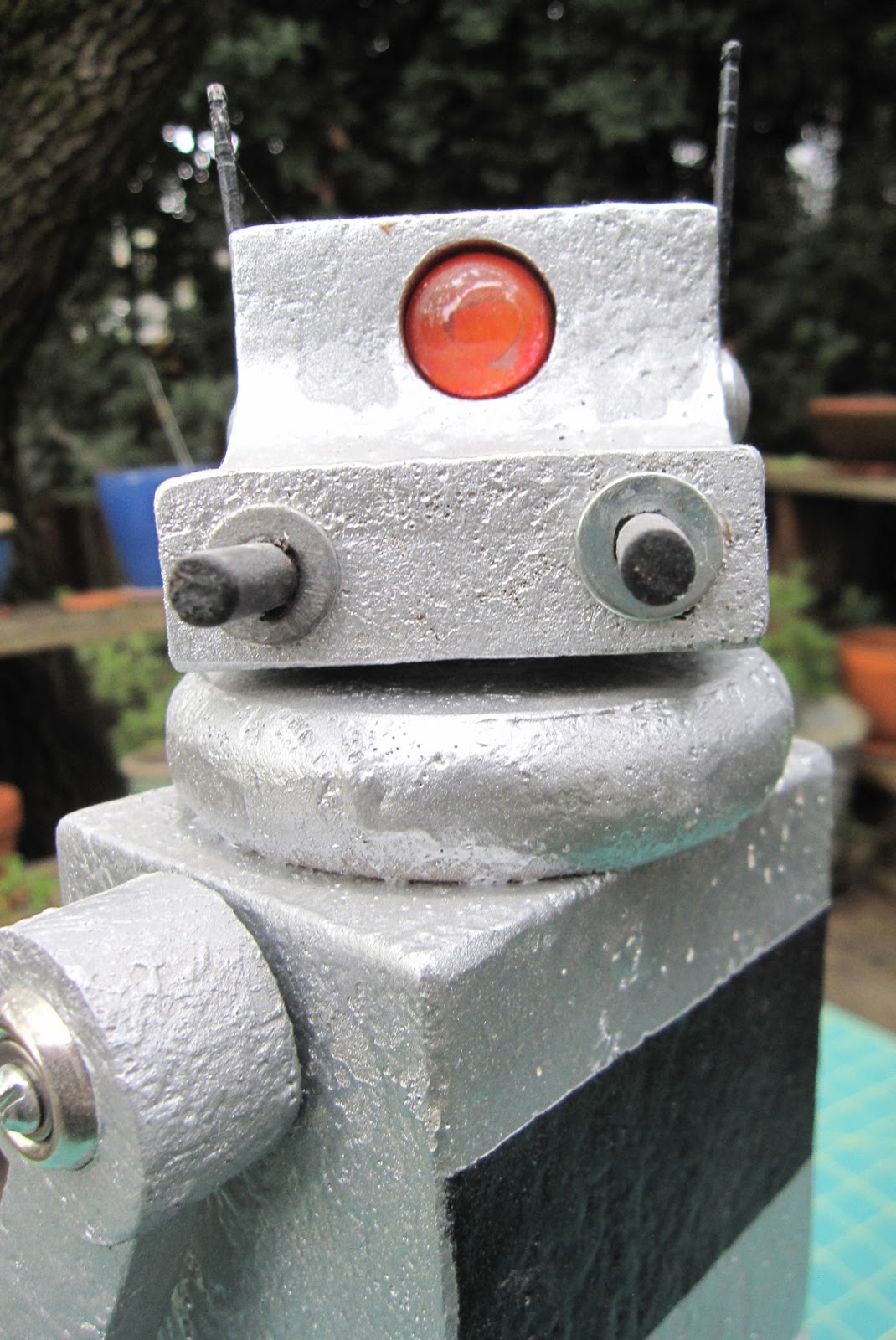 I textured its surface before painting because, in my original abandoned draft, the Last Mechanical Monster had spent some years exposed to the elements, so I wanted its steel surface to show some corrosion.

It's not a rigidly faithful model. My Robot's neck/collar is too large and thick, its spherical hands are too small, the shoulders are all wrong--limitations imposed by the materials available and my limited time and skill. Yet it still serves an important function as a handy reference, especially for proportion. Its hips are as broad as its shoulders, its elbows fall at the waist, its hands reach nearly to its knees. I don't really pose and copy it, but while I draw I can glance up and make sure I'm still, as the cartoonists and animators say, "on model." 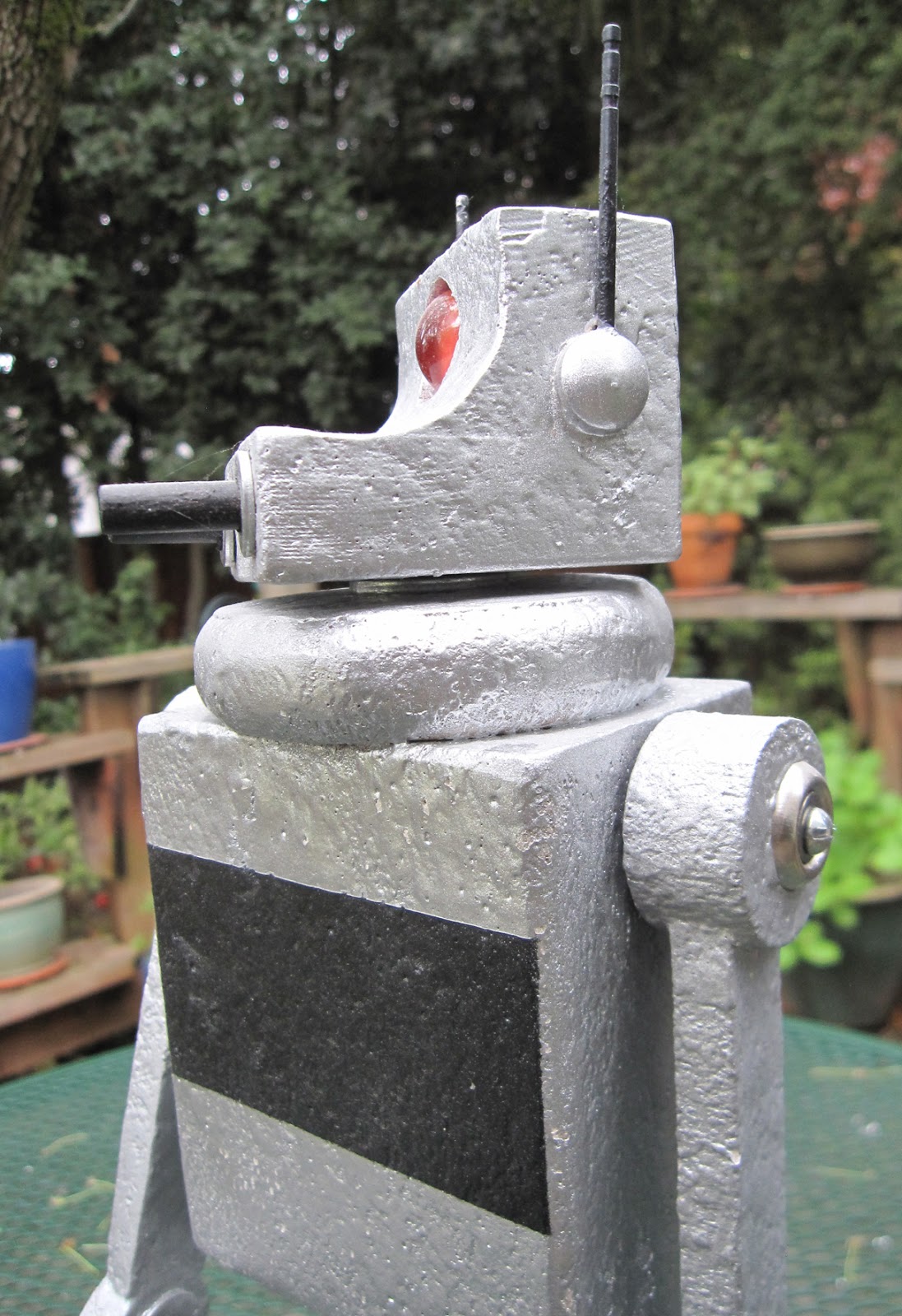 As I work on The Last Mechanical Monster, I reap the benefits of the original Fleischer animators' excellent design work. For the most part the Robot is dead easy to draw--all rectangles and cylinders--as you'd expect for a character intended to be hand-drawn on hundreds of animation cels for a cartoon. Sometimes I get a sense of communicating with them through the decades, like "I see what you guys did there, very clever!"

One of my challenges in drawing the Robot is resisting the urge to make it too big. The shorthand description of the Fleischer cartoon is "Superman fights giant robots." Even the "Superman Wiki" entry lists their height as 30 feet. But they're not really that giant. The Fleischer cartoon is inconsistent, but I based my estimate of the Robots' size on two data points: Superman flat-footed (not jumping or flying) punches them in the chest, and Lois Lane climbs into one's cargo hold by standing on a chair.


Making some assumptions about Superman's and Lois's heights, I figured the Mechanical Monsters couldn't have been more than 11 or 12 feet tall, max. In my webcomic I've gone to some effort to establish that scale. For example, when the Robot and Inventor stand side by side, the Inventor comes up to about the Robot's hip. I've shown the Inventor sitting on the Robot's head like a stool. Still, if I'm not attentive, I'll invariably draw the Robot larger than it ought to be. The model helps me keep that straight, too.

"Getting it right" is a slippery business in a comic fantasy adventure, especially when the source material itself wasn't a slave to consistency. I don't know if I put more or less effort into it than another writer/cartoonist would, but this is the kind of detail I have to work out for myself before I can play in this world. Building a model makes it a bit more real for me.

Plus it looks really cool sitting atop my desk next to the rocket ship.

I should have known the robot had a real-life mock-up! Pretty sweet. :)

I totally use the same cutting board your robot is standing on for my increasingly SO-embarrassing custom shirt projects. It's a tool I didn't know I needed until I started using it. How did I live my life before owning a nigh-impervious cutting surface?

Jim: Those cutting mats are great. I have two; this large mat is one I inherited from my Mom, who used it for sewing. Someday I'm going to glue the smaller one to the back of my wooden drawing board, which is all chewed up by 30 years of Xacto knifing (fortunately I had the foresight to only use one side of the board for cutting).