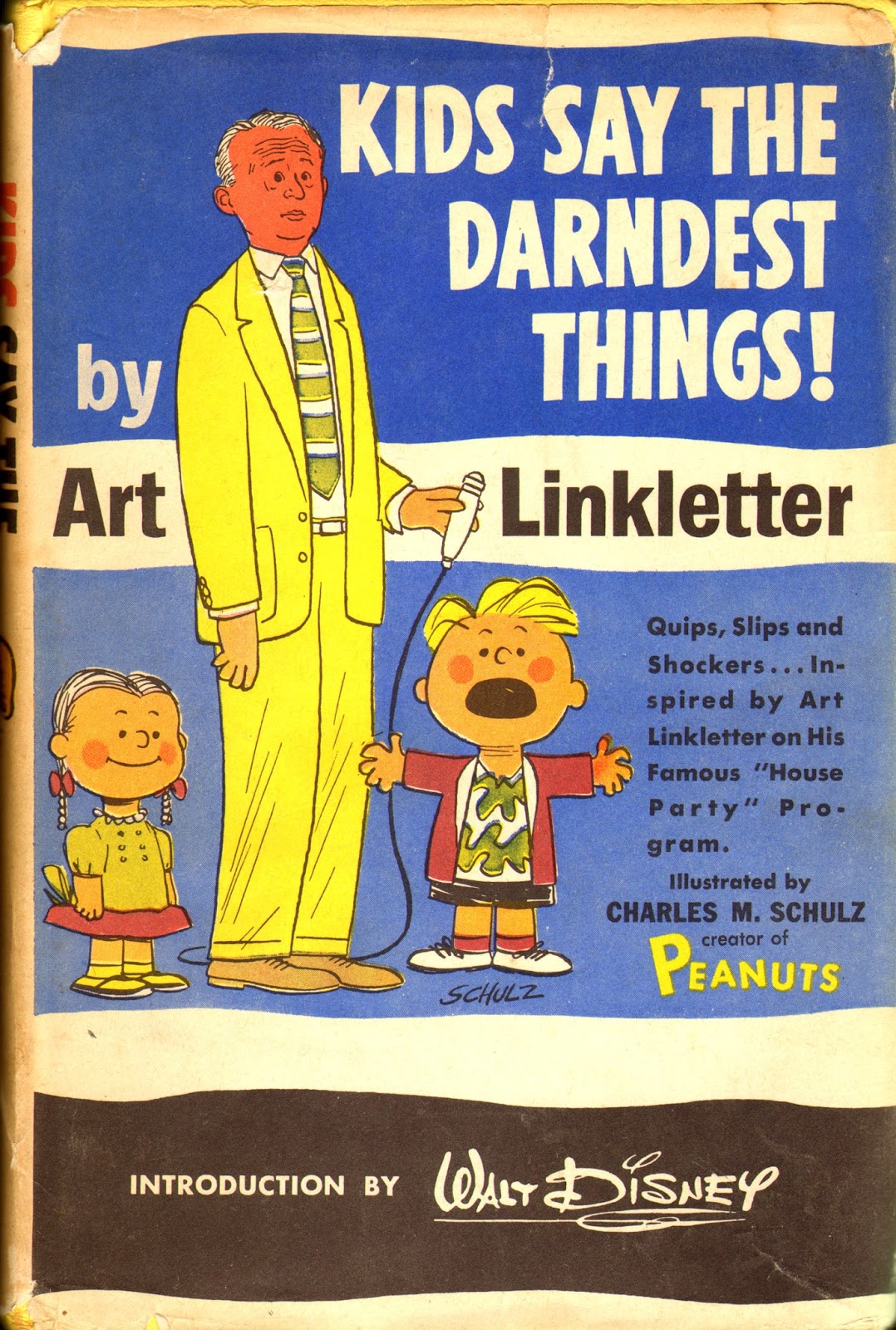 This may be a case of me learning something that everybody else already knows. But if it's news to me, maybe it'll be news to you, too.

Trolling through an antiques store Sunday, I found a book I hadn't seen before that struck me as the perfect synthesis/collision of mid-20th-Century pop media: 1957's Kids Say the Darndest Things by TV and radio personality Art Linkletter, with an introduction by Walt Disney and illustrations by Charles Schulz.

Disney and Schulz in the same book?!

I'm old enough to remember Linkletter, the affable, avuncular personality who made a living interviewing regular folks and wringing hilarious homespun insights and malaprops from them. Beginning in radio with "People Are Funny" in 1943, Linkletter soon found a gold mine in children, spinning the concept of "Kids Say the Darndest Things" into a TV show, a movie, and this first of several bestselling books. It was warm, corny, kind-hearted entertainment that in the '50s and '60s made Linkletter a star.

It's no surprise that Walt Disney introduced Linkletter's book. The men were friends and occasional business partners. Linkletter hosted the televised opening day of Disneyland just two years earlier, and for years Linkletter got a lucrative cut of every Kodak camera and roll of film sold at the Magic Kingdom.


The wild card is Schulz. Peanuts had debuted in October 1950, so was probably not yet seven years old when Linkletter's book came out in 1957. Schulz also illustrated a sequel in 1961. Peanuts and Schulz weren't yet the phenomenon they would become but were clearly on their way. It seems to me that this project must have hit a real sweet spot in Schulz's career: much earlier and he wouldn't have been high-profile enough to be offered the job; much later and he would have been too big and busy to accept.

By my quick count, Schulz drew about four dozen spot illustrations for the book. His rendering of Linkletter for the dust jacket is about the only time I can recall him ever doing caricature. The charming drawings are mostly direct illustrations of the text. For example, one kid told Linkletter, "I once had a dog, but he got married and moved to Oakland," and Schulz drew this:


More examples, chosen because I found them particularly neat or interesting:

I've seen examples of Schulz's early magazine cartoons and his short-lived sports-themed comic strip It's Only a Game, but missed this Linkletter work entirely. This link between one of the greatest cartoonists, one of the most successful movie producers, and one of the most beloved media personalities of the 20th Century kind of makes me see all of them in a different light, and finding new Schulz art I never knew existed feels like discovering a lost Beatles song. Best $10 I've spent in a long time.