Mom's Cancer Plus a Decade 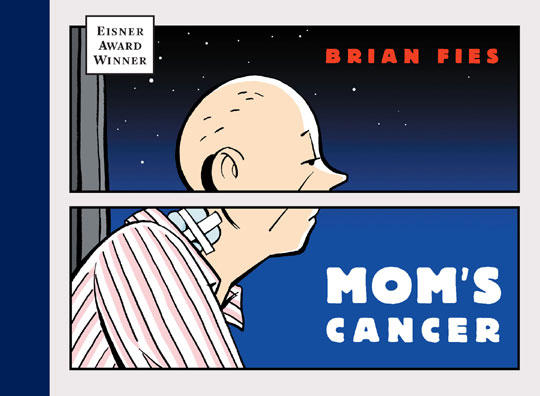 This may make some of you feel old.

In the early Internet days, people with common interests could congregate via an Internet system called Usenet. Similar to Web bulletin boards or forums, Usenet groups were set up with names such as rec.arts.comics.strips (RACS) so folks who loved, say, comic strips could get together and talk about them. Usenet groups still exist, though many have been overrun by zealots and spam, and many of their users have migrated to other watering holes. RACS is one of a few I know that remains respectably active.


For Your Consideration Please: A Comic Strip About Cancer

My mother was diagnosed with incurable lung cancer. I made a comic strip about it.

www.momscancer.com is a work in progress. It is my magnum opus, my "Citizen Kane," the project I may have been born to do. While it is not finished, I feel it is at a point where it would benefit from some constructive criticism.

I would appreciate your visits and opinions. I made my first post to RACS in 1999 after lurking for a couple of years, and have been a constructive (though not always frequent) contributor since. I've never asked for anything before and am considerably nervous about do so now; I cannot imagine a more informed or difficult audience to please. Negative opinions will mean as much to me as positive. I've been working for months with y'all in mind. This means a lot to me.

Thanks, gang. As I add chapters in the coming months, I'm sure I will appeal to you again. If you like it, tell a friend.

Reading that now, I'm embarrassed by both its earnestness and conceit. "Magnum opus" indeed! But that debut changed my life and my family's lives. I serialized Mom's Cancer online because it was free and I didn't know what else to do with it; I mentioned it on RACS because I didn't know how else to get the word out. That one Usenet post was ALL the marketing I ever did. The response was more than I could have anticipated or dreamed. Like the old shampoo commercial said, I told two friends and they told two friends and they told two friends . . . and within a few months it went viral.


Because of RACS, Mom's Cancer later won awards, found a publisher, and gave me a semi-pro career in comics I continue to enjoy. Most important to me, because of RACS my mother got fan mail (!), made pen pals, and I think found some purpose in fighting the disease that eventually killed her in October 2005. Few things made Mom happier than a stranger telling her they'd quit smoking because they'd read her story.

A 10-year update: My sisters still live together in the Los Angeles area, though they long ago sold the Hollywood home they bought with Mom. "Nurse Sis" Brenda remains a nurse, supervising at a major university hospital. "Kid Sis" Elisabeth continues to pursue her passion as an independent filmmaker. My sisters often collaborate to write, produce, and direct their own screenplays and short films that have earned festival accolades.


I get on pretty well with my Dad, which may be surprising because I gave him a hard shot in my book. Aside from my mother's, his was the reaction I feared most, but he couldn't have been cooler about it, saying "You have to tell your story your way." Years after I wrote Mom's Cancer, my family and I actually visited his former-hippy-commune spiritual retreat in the mountains of New Mexico. It was nothing like I drew it. 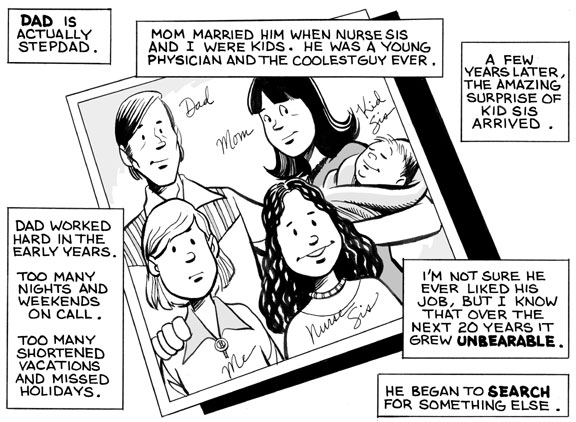 Mom's dog Hero is still alive and yapping happily with my sisters.

I dream of Mom often. When I do, my dreams are mostly happy ones. 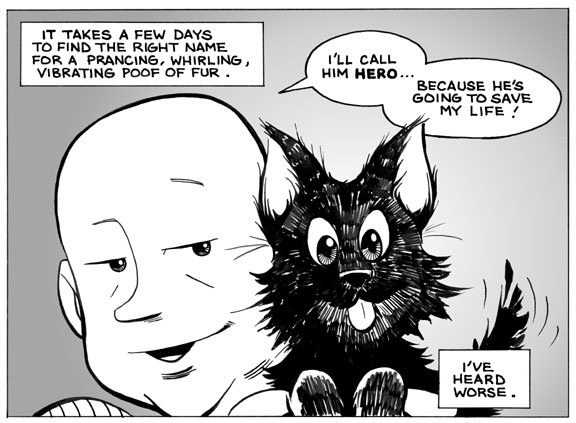 I'm giving a brief talk at an upcoming Comics & Medicine Conference in Baltimore in which I plan to touch on what these 10 years have meant to me. Lessons learned. The fine line I don't want to cross is coming off self-congratulatory, because that's not the point. Rather, through Mom's Cancer I've been privileged to meet some amazing people and, without being presumptuous, to feel like my book spoke for some of them. I've been part of the early days of the growing field of Graphic Medicine, where physicians and teachers such as my friends Ian Williams, Michael Green and MK Czerwiec incorporate comics into patient care and medical school curricula (!). I made other friends around the world, both through Mom's Cancer and my second book, Whatever Happened to the World of Tomorrow (which, it goes without saying, wouldn't have happened without Mom's Cancer), as well as my new webcomic.

Whatever I wanted and expected when I wrote that Usenet post 10 years ago, I never could have anticipated the most gratifying result: the people I met, the friends I made, and the communities I was welcomed into.

In a recent interview, I said: "I know why Mom's Cancer got the attention it did. I also know I'll probably never create anything with the same raw passion, intensity or honesty. It was special. If I live to be 100 and write 30 more books, the one that leads my obit will be Mom's Cancer. And I'm proud, grateful, and satisfied with that." 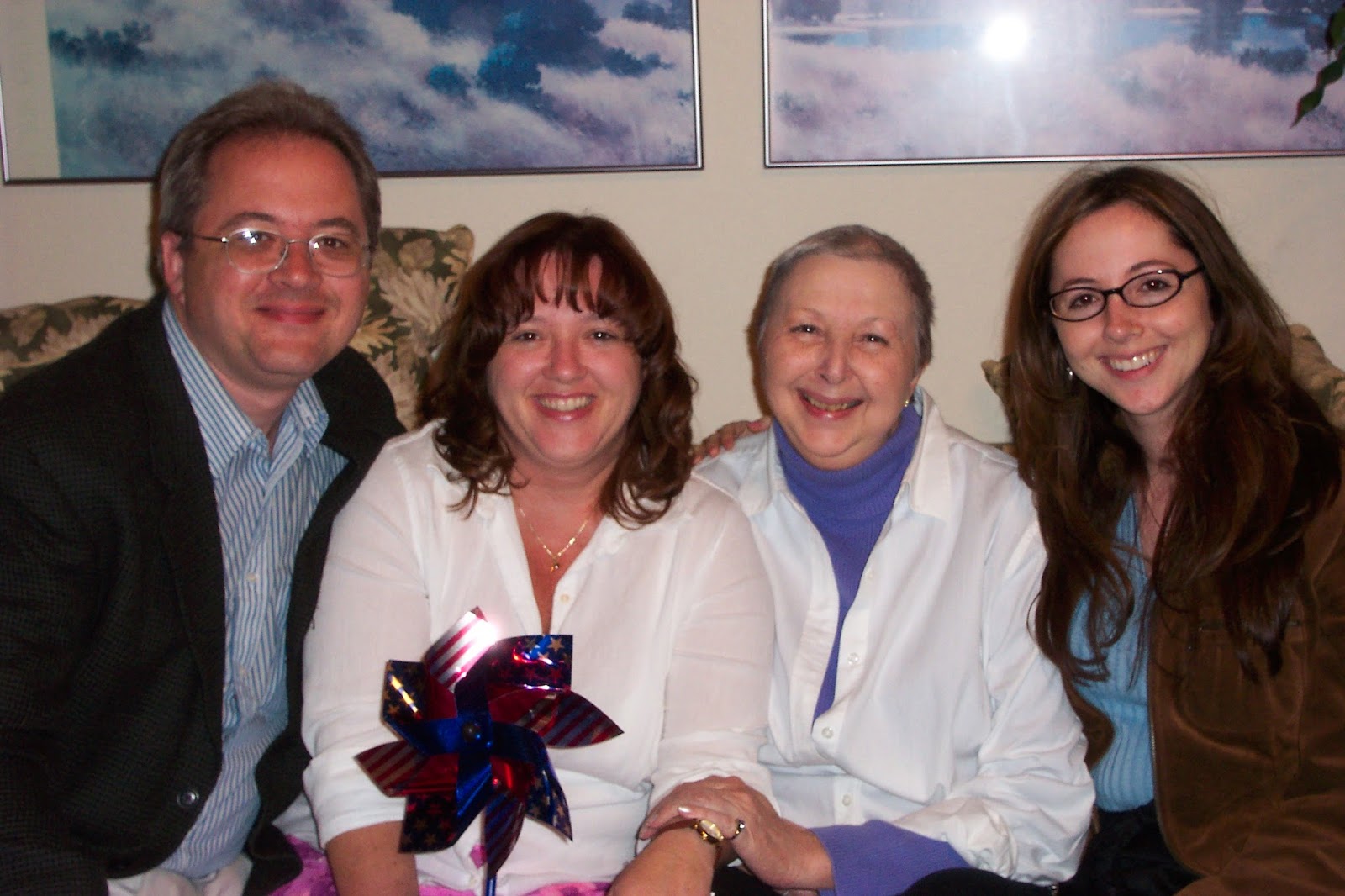 This book continues to mean a great deal to me. Thank you for sharing it with all of us, Brian! Looking forward to seeing you in Baltimore!!

Hi, Mita! I'm looking forward to seeing you again as well, glad you'll be there.