I know there's something a bit unadult about immersing myself in the joys of childhood from time to time. I understand the criticism of Disney as a purveyor of bland, bourgeois, kitschy entertainment. I realize that whatever warm and happy feelings I have for Disney exist partly (mostly?) because clever marketers programmed them into me.

As I point out in Whatever Happened to the World of Tomorrow, Disney and Disneyland are mid-century Americana, for better and worse. They're in our national DNA. When Walt opened Disneyland in 1955, there was nothing else like it. It was ambitious and, yes, visionary. Although Walt was a flint-hearted CEO running a profit-making corporation, he spent more money than necessary to make Disneyland better than it needed to be. I think it shows.

Also, as I grew up in South Dakota in the sixties watching "Mickey Mouse Club" reruns and "The Wonderful World of Disney" on TV, Disneyland was everything my life wasn't: not just a theme park with a few fun rides, but southern California, orange groves, movies and magic. I remember a friend coming back from a vacation to the Magic Kingdom with a mouse-ear beanie that we revered as if it were Excalibur. When I finally made my first visit to Disneyland with my grandparents at age 9, I was not disappointed. I admit I still feel that familiar rush today, walking past the gates and through the tunnels under the railroad tracks, Adult Me fully aware that I'm being manipulated and Kid Me not caring in the slightest.

It also occurs to me that a quality many writers and cartoonists share is the ability to tap into their playful, childlike nature. I see no need to quash it.

A lot of people feel likewise. Thousands of books, magazines, and websites are dedicated to Disney past and present. Two sites that I visit occasionally are Stuff from the Park run by Matterhorn1959, and the quixotically named Gorillas Don't Blog run by Major Pepperidge. Both feature old photos from Disneyland's 55-year history, often with interesting or funny annotations. When our family returned to Disneyland last May (we get down there every few years, this time to celebrate my girls' college graduation), I took along a project and wanted to share the results.

My idea was to print out old photos posted on those two sites and reshoot the same scene as precisely as possible. I didn't spend a lot of time on it, and you'll see that some results are more accurate than others. A few were impossible due to changes in the park over the decades. I didn't even try Tomorrowland or Fantasyland, both greatly refurbished. But in general I was impressed by how little the bones of the place had changed. It was also neat to stand in the same spot someone else had stood 40 or 50 years before, taking the same shot, feeling a little connection with the ghosts of visitors past. It's an exercise I recommend. (Clicking on the photos links to larger versions.) 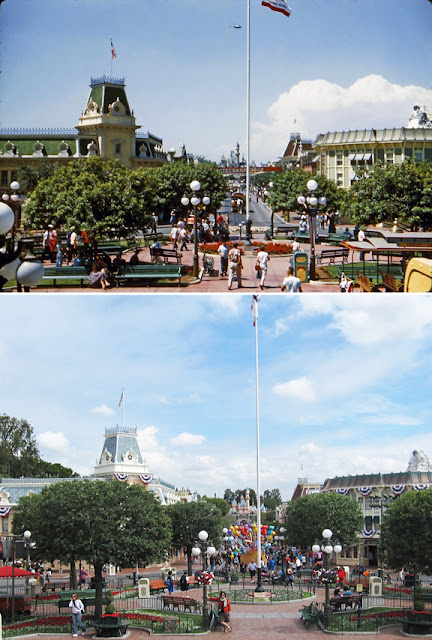 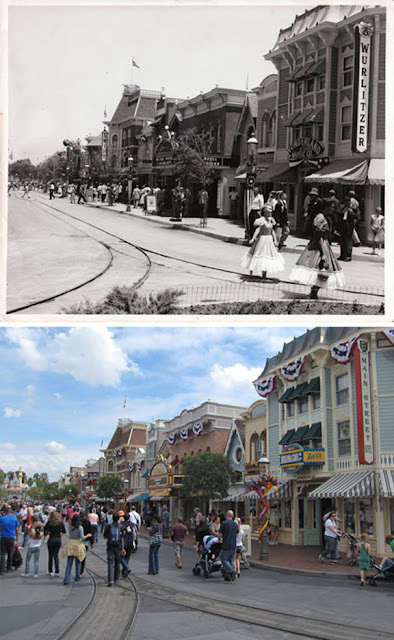 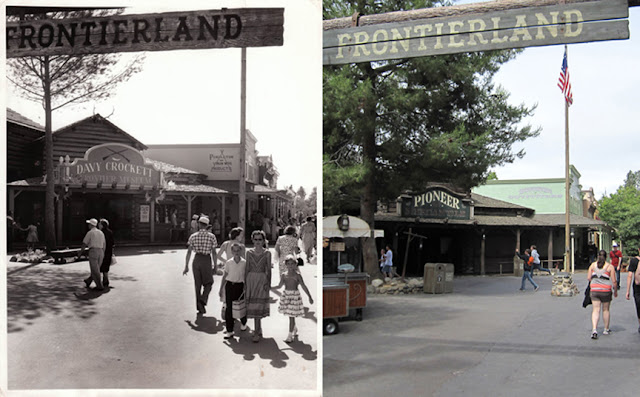 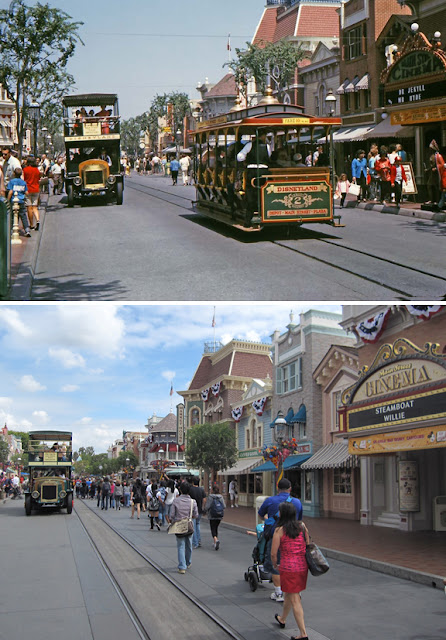 Main Street Omnibus and Cinema, 1966. I should have stood closer to the left curb, but had to shoot fast when I saw the bus coming.

Publicity still from New Orleans Square. Wish I'd had a ladder. 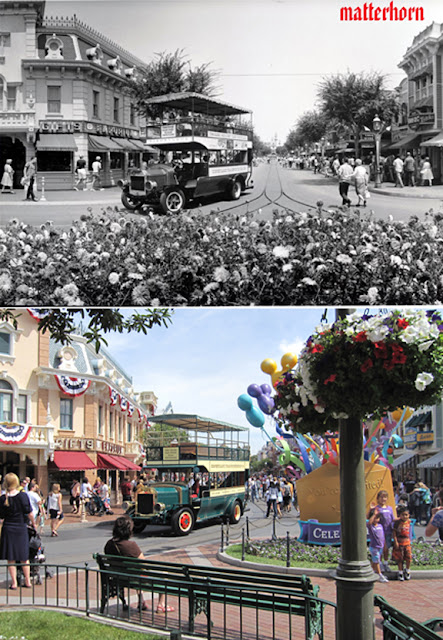 Omnibus rounding the Town Square at the top of Main Street. This is the only one that took a while to shoot; I waited a long time for that bus to come around. This was also one in which it was impossible to duplicate the original angle, looking right down the center of Main Street, because of new "features" in the way.


I had fun with this. Thanks again to Matterhorn1959 and Major Pepperidge for the inspiration.
Posted by Brian Fies at 9:47 AM

This is wonderful. Diane is going to have a lot of fun with it when she sees it.

Nice work (I'm a sucker for then/now photos and Disneyland.)
When I was in my teens I lived in Anaheim and my brother and I had annual passes. Sometimes we'd take the bus there after school and stay there until they kicked us out at closing time.
I was there for their 30th anniversary celebration (they let go a bunch of balloons) and the last (public) performance of the Golden Horseshoe Review.
So many fun memories!

sadly, i have NEVER been to Disneyland, even when i was on the road for a decade and regularly hitting So Cal. BUT, i have been to Disneyworld Tokyo, after hours, working with MJJ as he hosted a private party for about 300 of his 'friends' (Bubbles stayed back at the hotel).

still, never been to Disneyland...i'm envious...

Brian - a suggestion on photomontage: slicing the picture from days of yore into the current scene.

I've done this in the past with a few pics to surprisingly nice effect.

Sherwood, thanks. Was Diane a SoCal kid?

Namowal: Wish I'd had the presence of mind to see the original Golden Horseshoe Revue when I had the chance. Unfortunately, when I was a kid, sitting around watching a Wild West song and comedy show was the LAST thing I wanted to do at Disneyland.

Sligo Mike: You helped put on a private party for Michael Jackson and YOU'RE jealous. Hmm. I don't know much about Tokyo Disney, but I'll bet you'd find the Anaheim original pretty compact and crowded by comparison. I prefer the term "intimate."

Jim: Those photos are terrific! I remember seeing similar images somewhere else (may have been this Flicker group: http://www.flickr.com/groups/nowandthen/pool/). It seems to me the art is knowing which features to include and omit. I'll definitely play with it when I get the chance.

Brian, you're the pro-fessional artist here -- should be a piece of cake. I'm lucky if I can figure out where the vanishing point is in a picture! :)