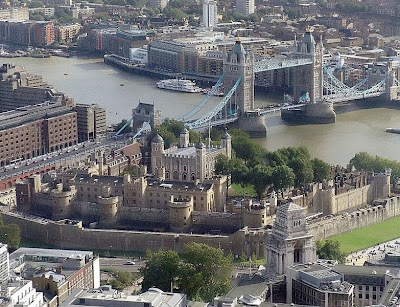 In my previous post I mentioned our tour of the Tower of London guided by Beefeater Ray, the Tower's Ravenmaster. Commenter Marion said she most envied Karen and me for meeting a Royal Ravenmaster, as well she should. Here are 5 minutes and 40 seconds of Ray in action.

You can hear Ray's ravens cawing at different points in the video. For those not hip to the legend, as I wasn't a week ago, it is said that if the ravens ever leave the grounds both the Tower and the kingdom will fall. To ensure that they do not, a flock of six ravens (and, as Ray explained, a couple of spares) are well kept on site with their wings clipped. Biggest, fattest, happiest crows I've ever seen.

Ray was quite an entertaining guide, but what doesn't come across in this clip is how seriously he takes his job. To earn the right to wear their slightly ridiculous tunics and hats, yeoman warders have to serve at least 22 years in the British armed forces as a warrant or senior noncommissioned officer and earn a good conduct medal. They live at the Tower itself (Ray later described how impossible it is to get a pizza delivered when you give your address as "the Tower of London"). It's a whole way of life--much more than being a tour
guide--and a part of history.
Posted by Brian Fies at 9:20 AM

Highly entertaining! In Newfoundland, the 5th of November is still known as Guy Fawkes night or, more commonly, Bonfire Night. People build huge bonfires on beaches, piles of wood seven or eight feet high sometimes, and light them in commemoration of the Parliament Plot. They burn into the very wee hours of the morning.

"Remember, remember, the Fifth of November".

I remember being 15 and visiting the Tower and, as a good Irish-American lad, thinking, "well, if you have to clip their wings ..."

I was surprised more people in the crowd didn't know the Fifth of November. I'm a USAan, and I know it. Maybe they were just shy.

The wing clipping did seem a bit like cheating to me (an Ireland analogy didn't occur to me, though). But the birds seemed happy and well cared for, and with a kingdom at stake I couldn't blame them.

I think a raven would be a great narrator for a comic (or animation) about the history of the tower- one who'd been living there for centuries, telling us all the things he's witnessed.