An Easter Egg from Tomorrow(land)

"Easter eggs" are little surprises hidden in video games, computer programs, movies, songs, etc. that aren't meant to be found by everyone. You only discover them if you push the right combination of buttons, click a special spot on the screen, notice a particular detail, or hear about them from a friend. In the new "Star Trek" movie, there's a frenetic scene of mayhem in which the Enterprise dodges debris from a dozen destroyed starships . . . and, flashing past in a fraction of a second, Star Wars' R2-D2. That's an Easter egg. 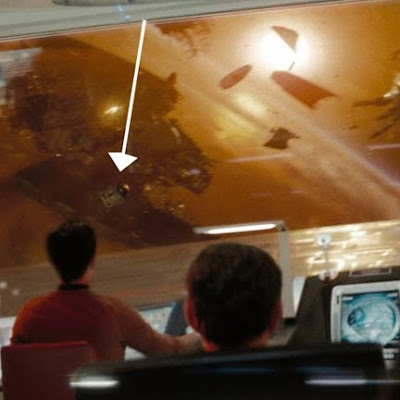 "Droid off the port bow, Captain!"
Here's one I dropped into Whatever Happened to the World of Tomorrow. The last chapter of the book tells a story of the future, from microscopic circuits too small to see to astronomical vastness too large to comprehend. It opens on what the reader might assume is a landscape of futuristic buildings, but which turn out to be (spoiler alert!) components of a microprocessor.
. 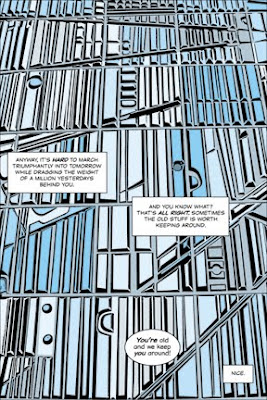 WHTTWOT, Page 177.
.
That whole page is an Easter egg. In reality, it's not a drawing of a futuristic city or a microscopic circuit, but a wall found in Disneyland's Tomorrowland:
. 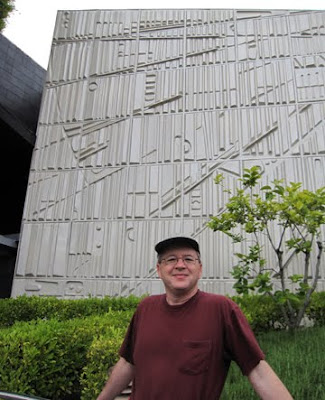 Me and "my" wall, taken when we revisited
Walt's original park a couple of weeks ago.
.
I remember first being impressed with the design of this wall decades ago. To teenage me, it screamed "the future!" We happened to visit Disneyland a few years back when I was pulling together ideas for WHTTWOT, and I took reference photos throughout Tomorrowland, not knowing quite what I'd do with them but hoping they'd inspire something. Later, they did. (Tax write-off!)
.
WHTTWOT argues that Walt Disney was an important influence on how Americans, and through them their politicians and scientists, came to view their future. Good or bad, accurate or not, Disney molded people's opinions, desires and expectations. So I thought it was very apt to include a little piece of Disney's vision in my World of Tomorrow. Of course I didn't expect anyone to catch it, but for those who do--and a few real Disneyland fans have--it adds a little bit more meaning and texture to the chapter. And fun.
.
Posted by Brian Fies at 11:08 AM

Going to have to reread your book backwards to uncover your hidden messages now ....

Haha. As a CPU designer myself, I was actually a little annoyed by that zoomed in view of the "microscopic circuit" when I read it, because it looks very little like what we actually draw. We don't do diagonal line, and we definitely don't do curves!

But now that I know the story behind it, I'm willing to give you a pass. ;)

Charlie, I did TONS of stuff I didn't tell you about! I figured you'd rather have plausible deniability, but if you really want to know . . .

Tim, don't forget that the circuits I drew are from THE FUTURE! (imagine that with an echo). Curves will become all the rage in CPU design around 2030. If it makes you feel better, my starting reference for the chip on pp. 179-180 was a Pentium 4, which I then rejiggered and enhanced a lot.

Both of those easter eggs are awesome - thanks for sharing them!

Brian, it does make me feel a lot better! I worked on three different Pentium 4 chips, so there's a good chance that something I drew made it's way into something you drew. How cool is that? :)

Any excuse to read it again will do, and this is a good one.

I bet you keep track of hidden Mickeys at Disneyland, too.

This is really neat! I always had the feeling that the pattern on the chip was inspired by *something* - it just had that feel. Now I know!

Hey, my word verification word is "fraticat"". Is that an alternate spelling?

Neil: You're welcome, thanks for checking in once in a while!

Tim: It's not only cool, it makes me very happy.

Sherwood: Please. Hidden Mickeys are for amateurs. It's looking for the hidden Jessica Rabbits that keeps me going back.

Ronnie: "Fraticat" could be "fraidy cat," but it also looks to me like a crime--when a cat kills its brother? Or when your brother *is* a cat? I don't know...but it's apt.