Envious? You Should Be. 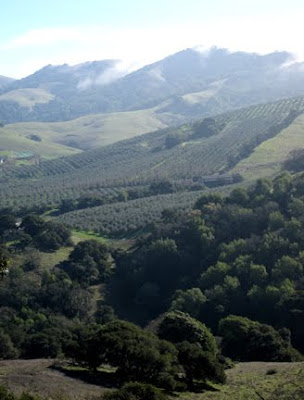 Once in a while, my wife Karen and I like to pick some nearby small town to explore. Some are so close we simply take them for granted; others are enough off the beaten path that we never quite have an excuse to get to them. Last weekend's gorgeous weather set us off to a hamlet less than an hour from home that, despite living here for decades, neither of us remembered visiting before.

The pictures above and below show the road to Point Reyes Station, Marin County, Calif.: green oak-studded hills undulating to the horizon with morning fog still clinging to their crests. It's wine and cattle country (those are vineyards above), an appealing mix of working farmers and artsy bohemians. We've driven through Point Reyes Station to get to the national parkland beyond, but couldn't recall ever stopping in the town itself. 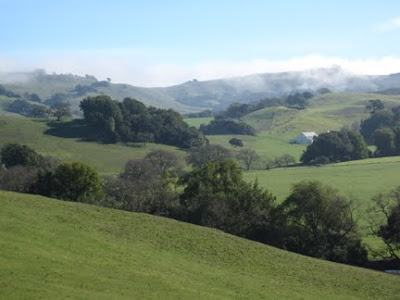 Point Reyes Station lies at the foot of Tomales Bay, which fills the enormous cleft left by the San Andreas Fault as it veers from land into the sea. Highway 1 along the coast is dotted with piers and shacks selling oysters raised in the bay and Dungeness crab fresh off the boat. 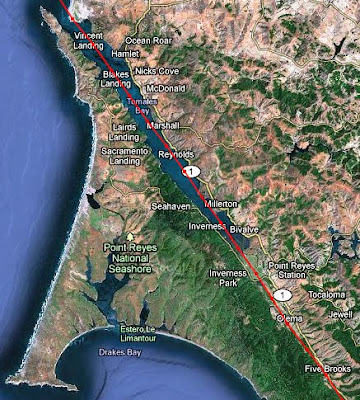 Where we went. The long, narrow body of water is Tomales Bay, with Point Reyes Station at its terminus (lower right). The red line marks the San Andreas Fault; millions of years from now, everything to the left of that line will be in the vicinity of Alaska. Glad I got to it while I had the chance. 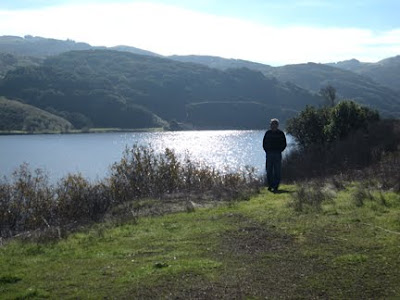 Enjoying the banks of the Nicasio Reservoir.
.
We had a beautiful drive, a great al fresco lunch, and a swell couple of hours poking through the four or five square blocks of downtown Point Reyes Station. A neat cap to the afternoon was walking into the town's little bookstore to find a copy of Whatever Happened to the World of Tomorrow on a table by the door. Of course, it was there because it was marked 40% off, but still . . . ! The proprietor was kind enough to let me sign it, and even promised to peel off the sale sticker and try to get full price for it. Good luck with that.
. 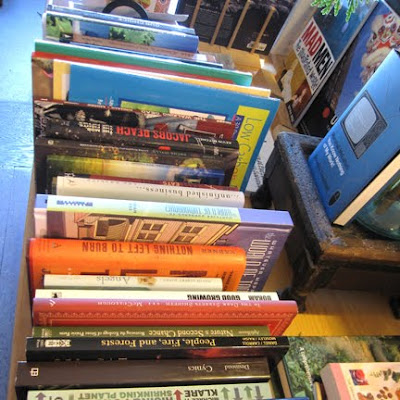 WHTTWOT "In the Wild" at Point Reyes Books.
.
There's no real point or message to this post, just an appreciation of some nice places in my neighborhood and one of the best afternoons Karen and I have spent doing anything in a while. Wherever you live, I'm sure there are some little overlooked towns nearby that are worth a visit (once your snow melts, heh!). It's a cool way to spend a day. 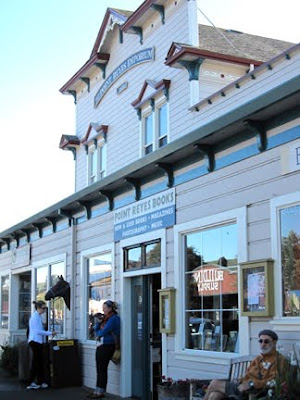 A great idea and gorgeous photos. Next time Diane and I get it into our heads to take a day trip up to Sausalito, we may just go a little farther thanks to this post.

"The red line marks the San Andreas Fault; millions of years from now, everything to the left of that line will be in the vicinity of Alaska. Glad I got to it while I had the chance." True, but then Reseda and Burbank will have moseyed up here to replace it, giving you more fascinating little towns to explore. Or not.

You can't imagine what these photos look like to someone under a snowdrift at -23C, but "heaven" begins to embrace it.

Beautiful photos and nice little narrative. Thanks for sharing!

We do this sort of thing just for you, you know, ronnie.

After our next big earthquake, feel free to post a picture of your immobile ground for us.

Really the only reason to live here at all is to make other people jealous. Ronnie, feel free to drop by anytime.

Gotta say, yeah, jealous does it. We're veering into that 20-below zone this weekend, and not the wimpy Celsius kind they have in Canada. The real brass monkey Fahrenheit kind.

My second cousins own Toby's Feed Barn there but I know whatcha mean. Haven't spent an afternoon there in days. I look forward to it. We live in a beautiful place!!!