A few weeks ago I mentioned that I'm helping organize a Graphic Medicine conference in Chicago as a follow-up to the 2010 London conference I enjoyed so much. For some reason, someone thought I might be useful and asked if I'd join the committee; for some reason, I said "yes." We hope the cartoonists, medical professionals, academics, writers, critics and fans who come to the "Comics & Medicine: The Sequential Art of Illness" conference at Northwestern University June 9-11, 2011 get as much out of the next event as I did the last.

In recent weeks we've lined up Scott McCloud, Phoebe Gloeckner and David Small as keynote speakers, which is a very impressive roster of comics talent. We also issued a "Call for Papers" asking people to propose ideas for papers, panels, workshops and poster sessions they'd want to present in Chicago. Now we're trying to drum up some publicity (which, honestly, this blog post is a tiny contribution to) so that potential participants will check out the Call for Papers and help us program this thing. The deadline is February 28. 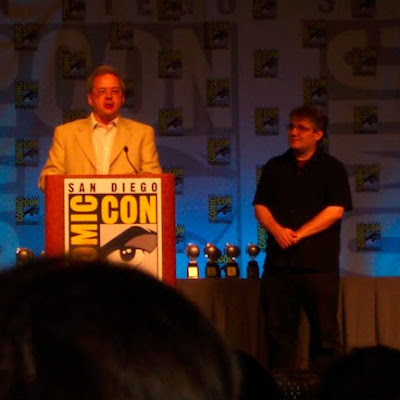 The one time I met Scott McCloud, our conversation went something like this: Him: "Congratulations." Me: "Thanks." Then he handed me an Eisner Award. I'm hoping to renew our acquaintance in Chicago.

Johanna Draper Carlson (who was one of the very first pros to say nice things about my Mom's Cancer webcomic and I'll never forget it) at "Comics Worth Reading" just posted an interview with me about the conference. Rather than repeat it all, I'll suggest anyone interested in the details go read it there.

More information about the Chicago conference, including the Call for Papers, is available at the Graphic Medicine website. That site is maintained by Ian Williams, the cartoonist/physician who invited me to London and is also involved in the planning for Chicago. 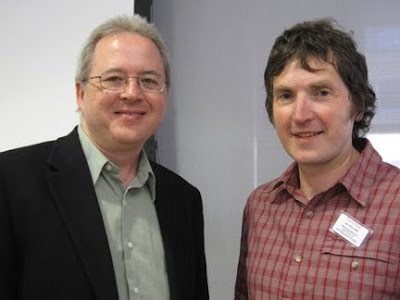 In London last June with Ian Williams, whose acquaintance I also hope to renew.

It's an understatement to say I'm not much of a team player or joiner. If I hadn't had such a terrific time in London, and didn't feel that Graphic Medicine was a worthwhile idea, I wouldn't be involved. As I told Johanna, I think these conferences focus on an aspect of comics with vast untapped potential to make a lot of difference in people's lives. Mom's Cancer gave me a peek at that potential. I'd like to see it develop.

I'd be interested in knowing how wide the net is that you're casting. Would something like Raina Telgemeier's "Smile" be considered medical or social?

Mike, it's hard to say and not my call (although I'm on the committee). I've read "Smile" (and know Raina) and think it's a swell book, but my first impression is it's kind of a borderline case. The book's about being a young teen, only part of which is Raina's dental drama. However, I'll bet if she wanted to she could put together a powerful 20-minute presentation about her medical experience and how she portrayed it that would be a perfect fit. I could see her being one of three or four people on a very interesting panel. Entirely hypothetically, of course, I'm sure she has no idea the conference exists.

Our net is wide. We're open to being suprised by unexpected proposals. I think the hard part of the job will be fitting them together into something coherent.

Mike's 2 cents: Joyce Farmer's 2010 graphic novel SPECIAL EXITS, a fictionalized account of her own parents decline and eventual death, may be worth considering. It's one of the best GNs I've read.

Thanks, Mike. Haven't seen it, I'll check it out.