Here's something interesting: an "infographic" put together by MIT's Technology Review illustrating numbers of space launches by different countries over time. All types of space launches, not just manned flights. 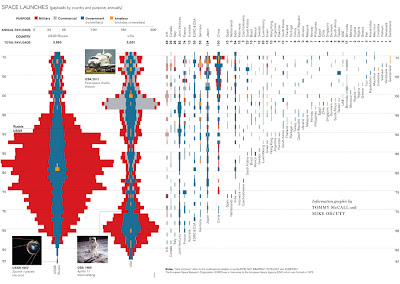 The size limitation of my blog doesn't do it justice. You can find a much larger version and a link to a PDF here, although only until October 19. Even at this small scale, though, I can explain some of what it shows.

Time goes from bottom to top, starting with Sputnik in 1957 at the bottom. The USSR/Russia is the fat red column at the left, the United States is beside it, and all the other countries that have shot something into space are laid out to the right. Red represents the number of military missions in each year, gray commercial, blue government, and yellow amateur (universities and such). Most noticeable is the big glut of Soviet military missions in the 1970s and '80s (which an accompanying article explains is partly because Soviet satellites didn't survive long) and the explosion of U.S. commercial traffic in the second half of the '90s. There's also quite a drop-off in Russian activity after the dissolution of the USSR, for obvious reasons.

I find it interesting how Russia's and the U.S.'s curves are nearly inverse images of each other, as if they could fit together like pieces of a jigsaw puzzle. I don't know if that has any meaning larger than, "huh, cool," but it kind of is.

Down in the "Halfway Game" comments, I alluded to the idea that looking at information in a new way can change your perspective on it. This graph does that for me. If you'd asked me to draw something like it, I probably would've shown the United States and USSR with roughly similar numbers of launches, distributed much differently over time (i.e., gradually increasing to a modern peak). For example, I would not have guessed that we rocketed more stuff into space in 1960 than we did in 2010. This one image rearranges my understanding of 54 years of history at a glance. New perspective is always worthwhile.
.
Posted by Brian Fies at 1:59 PM

What's not seen on the graph is the idea that the USSR/Russia accomplished just about all of those launches with the same vehicle: the trusty R7 booster that still hauls the mail to the International Space Station more than 50 years after Sputnik. The US has built incredible machines such as the Shuttle and the Saturn V, but it's an admirable statement the Russians make by sticking with what ain't broke.

This is all kinds of awesome. Have forwarded to Husband.

This is a really interesting and enlightening graphic. I would not have guessed this truth.

BUT... while I love all kinds of charts and graphs and maps, I absolutely hate this one.

As far as I can tell, the width (or length, looking sideways) of the bars represent the "payloads" (is that the number of launches, or pounds or cargo, or what?) per year.. but the bars grow from the center, in TWO directions! To find the actual value, you need to add from "zero" in the middle, both left and right. But in reality, your eye is drawn to the jagged edge to find the differences.. but there you are seeing only half of the difference between adjacent years.

What possible reason could they have for drawing it this way? Am I just reading it completely wrong?

Good point about the Russian rocket Jim, and I think it shows in the constancy of their launches though the years while ours shows more fits and starts.

Thanks, Ronnie! Hope he likes it.

Tim, I got a copy of your comment in my In-Box but it didn't show up here. I didn't delete it!