Google created a special logo for its homepage today honoring the 100th birthday of Mary Blair, an illustrator/designer/cartoonist whose work I like very much.

Ms. Blair, who died in 1978, had a distinctive style that emphasized color, light, pattern, and stylized geometric shapes in an almost cubist fashion. She did design work for Walt Disney for years, and her ourvre is probably best represented these days by the "It's a Small World" attraction she created for the 1964 World's Fair, which was later moved to Disneyland. Love or hate the tune, celebrate or scoff at its message of world peace, but you've got to acknowledge that Mary Blair designed the heck out of that boat ride. 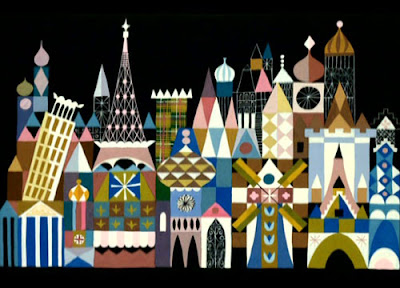 It took me some time to warm up to the art of Mary Blair. To the extent I was aware of it when I was young, I remember finding it treacly and simple. What could be easier than slapping down some circles and triangles? She hardly even used perspective!

As I got older and wiser, and did some cartooning of my own, my appreciation grew. Paring down a character, landscape or situation to its essence while leaving enough detail for someone to not only recognize but have an emotional reaction to it is very, very hard. In my own work, I sometimes redraw a panel or page; when I do, it's always to take lines out, never to put lines in. Mary Blair's art had a graphic economy and sophistication I can only admire and envy.

She was also a gender pioneer: at a time when women were forbidden from becoming Disney animators, she created her own non-animating niche with the company through sheer talent and determination.

I've posted more examples of Ms. Blair's artwork below, along with a short documentary put together by the Academy of Motion Picture Arts & Sciences (the "Oscar" people) for a panel discussion held yesterday in Los Angeles. Also, my pal Shaenon Garrity wrote this very nice essay after she co-curated a Blair exhibition at San Francisco's Cartoon Art Museum in 2007. Although that show is long closed, a few nice examples of Blair art are on permanent display at the Disney Family Museum, also in San Francisco. If you go at the right time, maybe you'll catch my daughter Laura volunteering there. Say Hi!

Now if only Disneyland would take down the Star Wars-themed paintings covering the walls of Tomorrowland and restore the Mary Blair tile murals still hidden beneath them, that would be a fitting tribute to the artist! 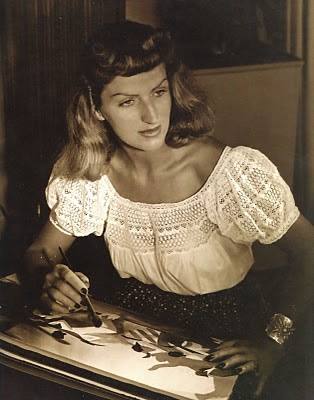 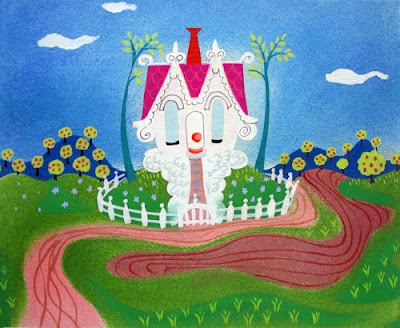 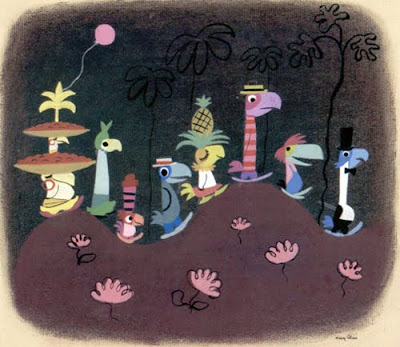 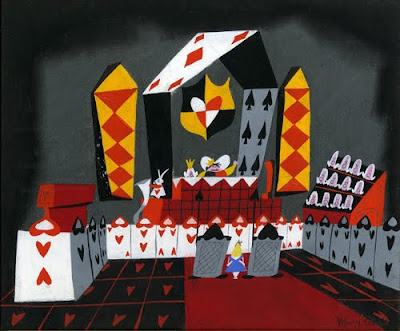 EDITED TO ADD: See this follow-up post for an additional thought on Mary Blair, including a piece I did that was partly inspired by her example.

Mary Blair's art is the epitome of "Less is More."

Unfortunately for Disney (and American culture), more seems to be more now. Witness the re-engineering of the It's a Small World canals and boats. The older, shallower ride equipment needed to be retired because the current average weight of a Disney guest caused the ride to violate Archimedes' Principle every few minutes. This pretty much goes against the theme of the show, doesn't it?

While watching the video segment part about overlays and flattened perspective, it struck me that "South Park" must owe a lot to Mary Blair. (The art parts, of course, not the gross parts.)

"Love or hate the tune..." Really, Brian? Is that ever in doubt? I love the mention of it in the clip: "... said they had a catchy little tune to go along with it. Little did I know."

Sherwood: Good point about South Park, and many other influences in the 50 years between. Stan, Kenny and Cartman are very Blairish. As for the tune, I understand that some people like it, hypothetically, and all types are welcome on my blog.

Today I was mildly disappointed that no fellow facebook friends (aside from you) pointed out the Mary Blair Google tribute. Tsk tsk.
When I was a kid I had lots of books (and a few record covers) illustrated by her. And I remember her Tomorrowland mural well (I lived in Anaheim in mid 1980s).
I agree she was an ace at simplifying her images to its "essence." Impressive stuff.

How lovely. Thank you, Brian.

Brian, you are truly the missing Sherman brother.