The Artist Should Be Hung. Or Hanged. Whichever.

Google Alerts says that LitGraphics, a traveling museum exhibition of comic art including mine, opened last month at the Fitchburg Art Museum in north-central Massachusetts. This is the same exhibition whose opening at the Norman Rockwell Museum I attended in November 2007, followed to Ohio's Toledo Museum of Art in October 2009, and then admired from afar at the James A. Michener Museum in Pennsylvania in September 2010. It runs through January 1.

The show is very much worth a visit, notwithstanding my contribution. There's work by Will Eisner, Robert Crumb, Art Spiegelman, Peter Kuper, Harvey Kurtzman, Frank Miller, Steve Ditko, Jessica Abel, Terry Moore, and more. I loaned them eight pages of original art from Mom's Cancer that I figured would be more productive touring the country than sitting in a file under my desk. I haven't seen these drawings in more than four years and am jealous that they're living a more interesting life than I am. 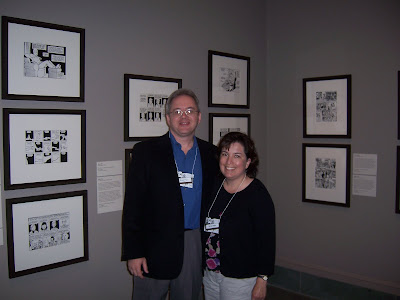 Karen and I by my wall at the Rockwell Museum opening in Stockbridge, Mass. (where I hear you can get anything you want) . . . 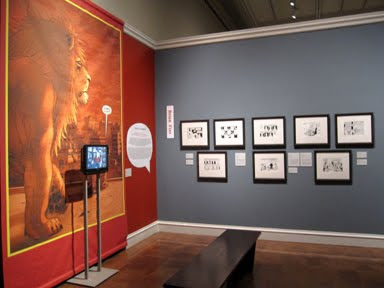 . . . and my stuff at the TMA in Toledo. I got in trouble taking this photo. The security guard didn't believe I was me even after I pointed to my self-portrait on one of the pages.

Both the Rockwell and Toledo museums set up their galleries to show videos of some of the artists (there's one playing in that picture immediately above) shot by videographer Jeremy Clowe and Rockwell curator Martin Mahoney, which I'll take the excuse to show again. Martin and Jeremy actually flew across the country to interview me in my home. The bit at the end of me drawing is in my backyard. Everything looks pretty much the same; many objects have not moved since 2007. I think I'm wearing those same pants today. Apologies if you've already seen this three or four times:

LitGraphic is a very good show, worth a visit if you're in its neighborhood or it ever makes it to yours (not sure how much longer the Rockwell Museum plans to tour it; I expected them to be done by now). I'd see it even if I weren't in it. 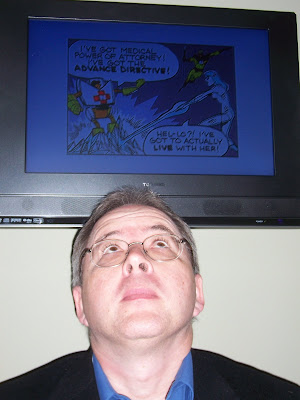 The Captain and I are heading to The F'burg on Saturday just to make sure they didn't hang anything crooked. Expect a multimedia posting - - unless it's snowing, which means fahgeddaboudit.

Wow, that would be really cool! I hope they've got my stuff on display--no reason to expect they wouldn't, but no guarantees (if they only had wall space for me or Eisner, Eisner wins). In any case, there's some outstanding work in the exhibition, and as I recall some good interpretive info. Hope it's worth the trip, I'll look forward to your review (weather permitting). Say "Hi" for me.

BTW, if you see any errors that need correcting--any erasures or touch-ups--just go ahead and remove the drawings from the frames and take care of it. Tell them I said it's OK.

"I haven't seen these drawings in more than four years and am jealous that they're living a more interesting life than I am."