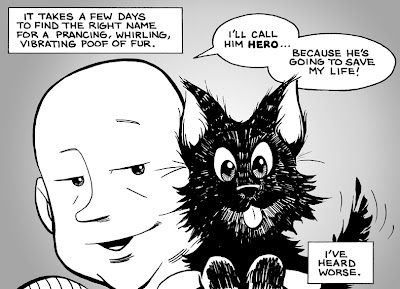 OMG (and I've never had a good reason to type "OMG" until today)! I've got a pre-Halloween treat for you, but first I have to tell you about my sisters.

That's "Kid Sis" and "Nurse Sis" from Mom's Cancer, who are real people who've been busy in the five years (!) since that book was published. I don't blog about them as a rule, figuring I already violated their privacy and betrayed their trust enough for one lifetime. But they're doing their own high-profile creative projects now, and I don't see any reason not to brag--especially with what I've got to show you today.

My sisters both continued to live in Los Angeles after Mom died. Nurse Sis Brenda is working as a supervisor at a big-time L.A. hospital. Kid Sis Elisabeth has worked on her own independent film projects, including a feature titled The Commune that has been screened and won awards at several festivals. Together, they put on the monthly "Bleedfest" film festival dedicated to raising the profile of new or overlooked women filmmakers. Their concept is really neat: every month has a different theme--horror, science fiction, fantasy, action--and for $10 the audience gets a full day of shorts and a feature, plus a chance to meet actual directors, actors and other filmmaking types. Awards are given, photos are taken, wine is consumed. (BTW, I designed their splattery logo and red-carpet backdrop.)

In recent weeks my sisters set themselves the insane challenge of producing an original five-minute movie every week, to post on their website TheFiesSisters.com. They lean toward the horror/thriller genre, and most aren't suitable for kids (though they're more twisted than gory, if for no other reason than budget). Here's this week's effort, featuring another character from Mom's Cancer that some of you who've read it may remember, and perfectly appropriate for all ages:

The star is Hero, who was given to Mom on her 65th birthday and has grown a little grayer around his muzzle. And best of all from my perspective, Hero's costume was sewn by my daughter Robin, who's developing mad skillz on the Singer.

Honestly, most of my sisters' productions look much more professionally polished than this, as you'll understand when I explain that their editing computer's hard drive just died and took with it three new films they were working on. Still determined to honor their weekly commitment, they shot and edited this one in a few hours. Like I said, they're insane. But in the best way.
.
Posted by Brian Fies at 8:22 AM

Oh, great. Now I've got something ELSE to keep me from work on Thursdays. Thanks, Brian. You have excellent reason to brag.

And Hero's my new hero.

Sherwood, you're almost 2 months behind and if you play your cards right that may just get you out of working 1 whole day! FYI: We never committed to a time length on our shorts... but we did say we'd put 1 out each week. Harder to do w/o a hard-drive. Hope to have our Mac back soon!!
xo,
Nurse Sis

This is marvelous. Hero is a real star and that ginger seal costume is excellent.

This is adorable! Definitely the best impersonation of a ginger seal by a dog that I have ever seen.