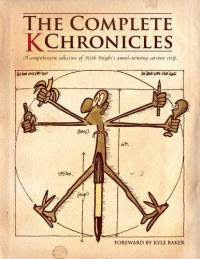 I think Keith Knight is one of the funniest and most distinctive cartoonists in the business and, as you'll see in this Two-Minute Interview, also one of the busiest and most entrepreneurial. He's got a lot going on. Keith used to live in the San Francisco Bay Area, knew Mom's Cancer, and so became one of those people I bumped into for five minutes once a year. Last Sunday at APE, I did it again.

Just a couple of follow-up thoughts: while not everyone appreciates poop humor, I think Keith's "9 Types of Baby Poo" is hilarious. Although I'm thankfully long out of the baby poo business, if it were still a part of my life or the life of anyone I knew, I would buy his beautiful color print and frame it for the nursery. 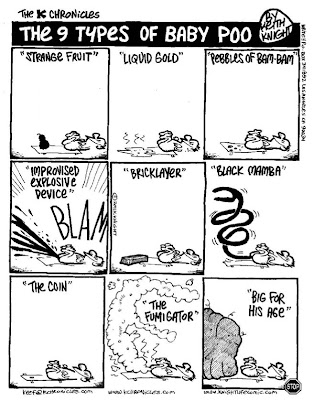 As often happens, a more interesting conversation took place after I turned off the camera. I commented admiringly on how many projects Keith had going and he told me he'd been criticized for being unfocused and spreading himself too thin. Not by me. I think diversification is smart. Comics, web, books, TV: it won't all succeed but something will, and the more seeds you sow the better chance of reaping something tremendous.

Also, I am consulting a thesaurus to add adjectives other than "cool" to my rhetorical repertoire. I promise to work in "good," "great," "neat," "swell," "keen," "spiffy," and "boffo" at the earliest opportunity.

Check out Keith's work at the Official K Chronicles and (Th)ink Website.

I had a nice long conversation with Editor Charlie last night that I'm not going to say anything about right now except that it's all good. All good.
Posted by Brian Fies at 7:41 AM

Keith Knight is one of my very favourite cartoonists. He also let us put a picture of Ginger on the r.a.c.s. pet page when she passed away. Thanks for this.

Of all the tribulations involved with raising kids, it's amazing how quickly parents become accustomed and desensitized to diaper changing. Before my kids were born, I dreaded all the cleanup and scrubbing and wash details my parent friends seemed to go through at every diapering incident. By the time my firstborn was a month old, though, I would not have been able to remember how many diapers I changed - - the once-horrifying prospect had built up a blind spot in my head and I moved to a distant celestial plane during each diaper event. It's been a while, but I'm pretty sure I could change my daughter's diaper one-handed while talking on the phone. Of course, I don't miss it one little bit now.

***
Glad you have good news from Castle Abrams. All the best with X and Y.

That's right, it was Lennie Peterson. A similar slice-of-life autobio tone, I understand the confusion.

Jim, I think parenthood provides a powerful antitode to all sorts of squeamishness (especially twins, if I may). Poop, pee, barf, blood. Basically, raising a baby is like working in a MASH unit.